Trying to find quality kids 20" wheel mountain bikes for 5 and 6 year old can be a bit of a problem as many manufacturers don't start building them until the next wheel size up.

Thankfully, there are a number of manufacturers that have realised that it's not just the big girls and boys that like riding through the muddy stuff!

At the moment there's a shortage of all sizes and types of kids bikes, so we've also included a few other options that would be good fun to ride off-road, but aren't specifically mountain bikes.

In this post, we take a look at our selection of some of the best kids 20" wheel mountain bikes that are currently on sale in the UK for kids around 5 years of age. If your child is going to be riding on all types of surfaces, such as grass, tarmac and road, then a MTB might not be suitable for them, so please take a look at our article on the best 20" wheel hybrid bikes, which will probably be more suitable. 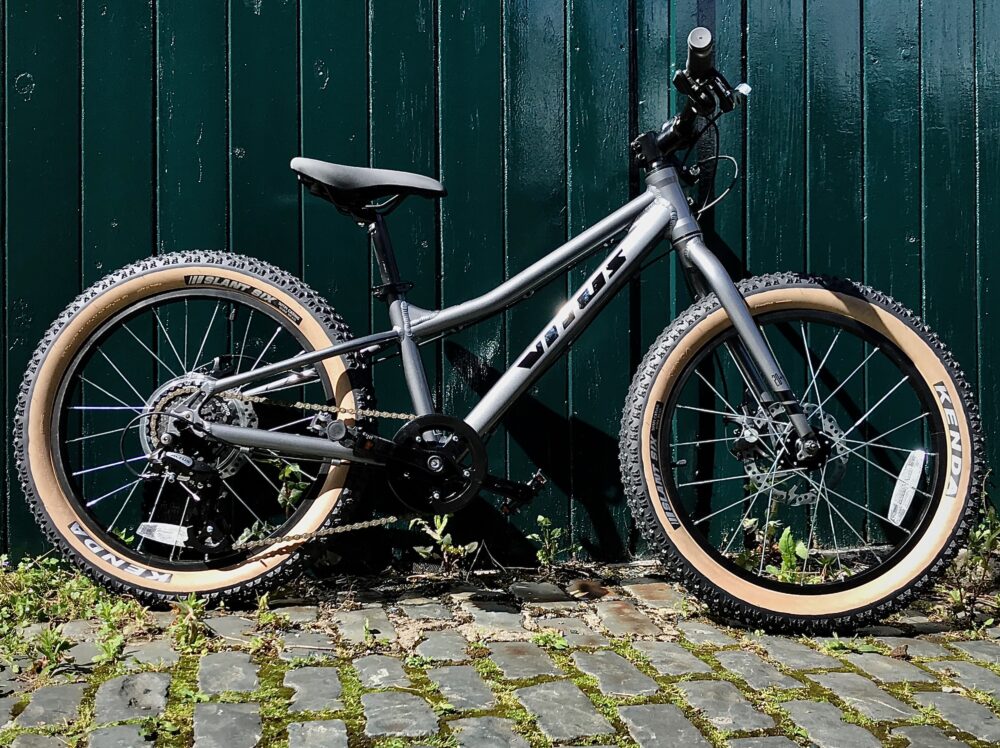 The Vitus 20 Plus is an eye-catching option for kids looking to get out on the trails. Released late October 2018, it's a 20" wheel bike with plus size (2.6") tan wall tyres - which will really make your Cycle Sprog stand out.

It's not all about looks though - it's built around a lightweight 6061-alloy frame, with stopping power provided by Tektro mechanical disc brakes which have adjustable brake levers for small hands.

We've reviewed this bike and our test rider really enjoyed riding the Vitus on a mix of on and off-road surfaces in various weather conditions.

You can read our full review of the Vitus 20+ here. 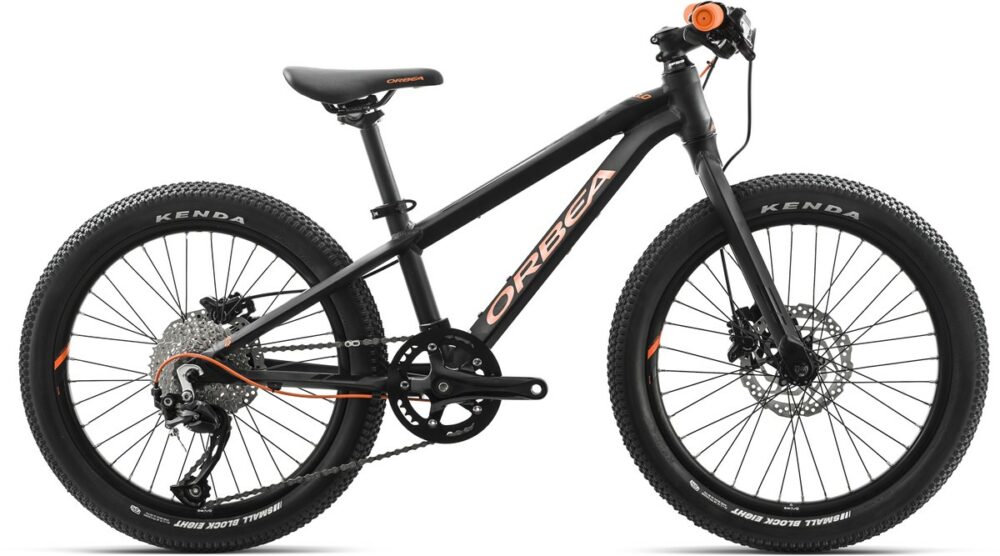 The MX24 series features in our 24" wheel selection of kids mountain bikes, so it seems only fitting that its pint-sized sibling should be featured too. This Team version comes with a better specification than the Dirt shown above.

The MX20 Team comes in two versions, with a choice of v-brake or disc brakes.

As you can see from the picture (the Orbea MX 20 Team is shown) the bike just oozes purposefulness, with its paintwork and 2.1 inch tyres back and front it looks desperate to be let off the leash.

The specification for the MX20 Team Disc is good, with a smattering of own-brand components in the usual areas (bars, stem, seatpost) matched to named components such as the Shimano MT400 hydraulic discs, that have a strong reputation for good performance at a palatable price.

The drivetrain comprises a 9-speed setup with Shimano Altus Shadow rear mech and shifters and matches a 34T single chainring up to an 11-36T cassette to give a good spread of ratios.

Shimano updated their groupsets earlier in the year, and in doing so the technology from the higher in the pecking order XTR an XT trickles down to the groupsets below, making them really great value.

This is a good move by Shimano and gives the MX20 bang up to date kit, which is great to see on a 20" wheeled bike.

Key data for the Giant ARX 20:

The Giant ARX 20 is a good quality lightweight bike, that is equally at home on the trails and the tarmac.  We've included it here as it's a good all round versatile bike that may come in stock before some of the more specialist mountain bikes.

We were lucky enough to have testers Katherine and Jessica put one through its paces. You can read their thoughts in the review here, or read our first impressions review here. 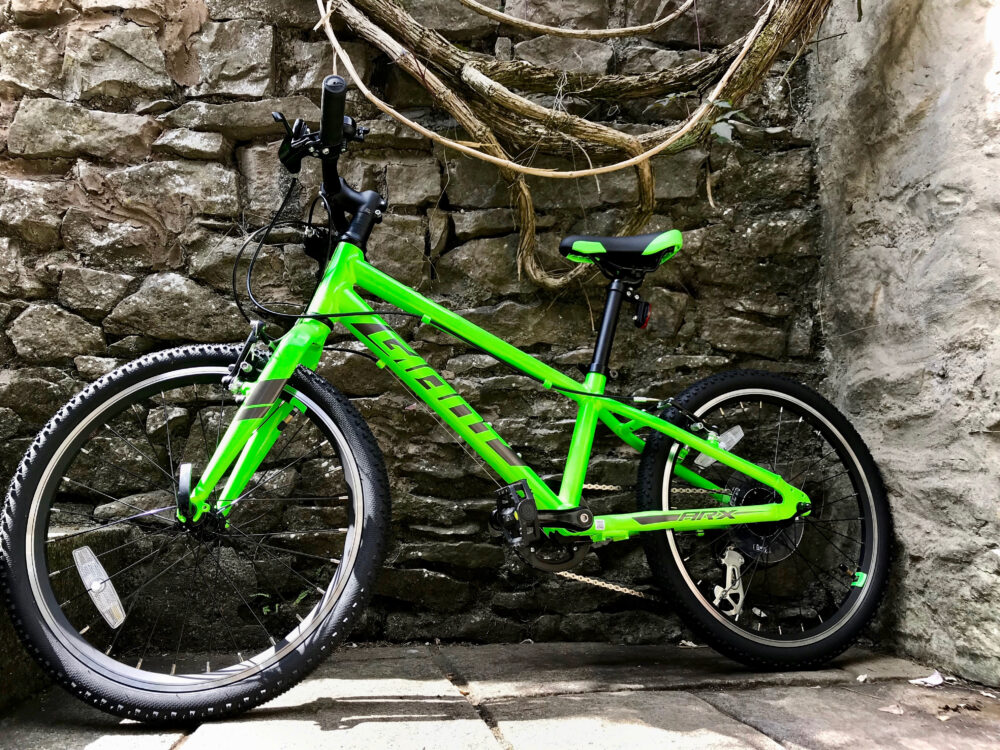 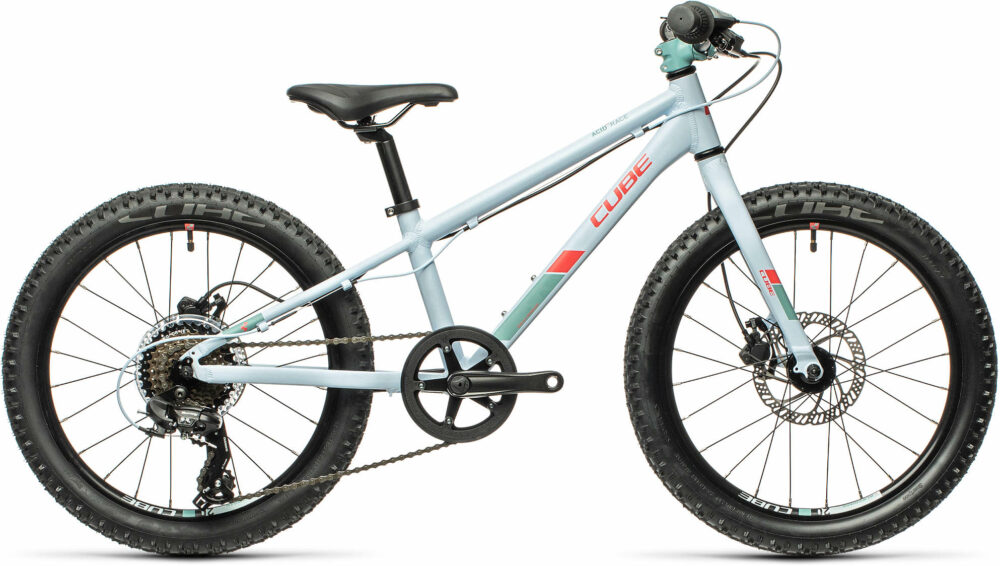 The Cube Acid 200 Disc is specified with mountain biking in mind.  They’ve upgraded their standard Acid 200 with disc brakes front and rear to make stopping easier on the trails.

A useful feature is a replaceable derailleur hanger, so that the occasional mishap doesn’t write off the entire frame.

We’ve not reviewed this particular bike, but we’ve tested a number of Cube’s larger mountain bikes and have always been very impressed with them. 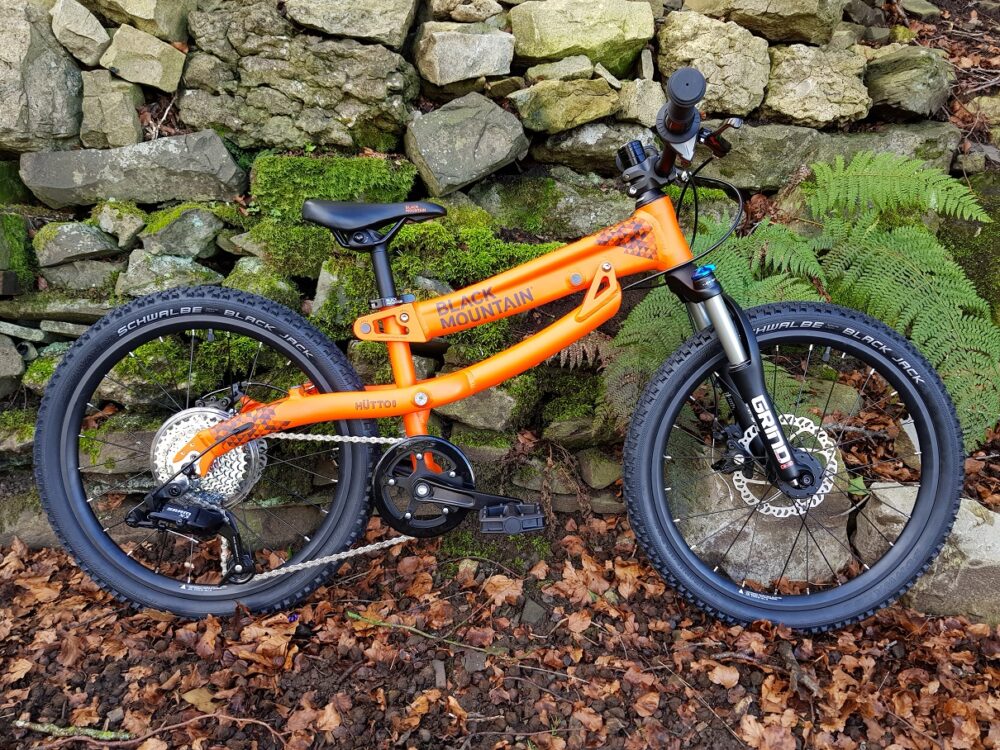 Black Mountain is really taking the kids bike market by storm with their "growing bikes".

They've now introduced a couple of larger wheel sizes to the range, with the HÜTTO being the 20" model.

The premium specification HÜTTO Trail (pictured above) comes kitted out with disc brakes and front suspension, which is perfect if you're planning on tackling a lot of off-road riding.  All models come equipped with 7 speed SRAM Twist shift for hills.

Aimed at kids aged roughly between six and eight and a half, Black Mountain uses its EPOK growing frame design so it can start off in small pedal bike mode and be extended to large pedal bike mode as your Sprog grows.

At the current time, this has the added advantage of providing peace of mind that you're going to have a bike that lasts for a while as your child grows.

With the unprecedented situation, we currently find ourselves in we don't know what's going to happen with stock levels of kids bike over the next few months.

If your child is at the lower range of the sizing for the Hutto (118cm to 134cm) this might be a wise choice as you'll have a bike that will grow with them.

The HÜTTO  comes in three versions and clicking on the links below will give further details for each version:

The HÜTTO is available in four vibrant colour options - orange, green, purple and blue and comes with a three-year warranty.  We've reviewed the slightly smaller 18" wheel Black Mountain KAPEL and were very impressed with it's slack geometry and mountain bike inspired styling. 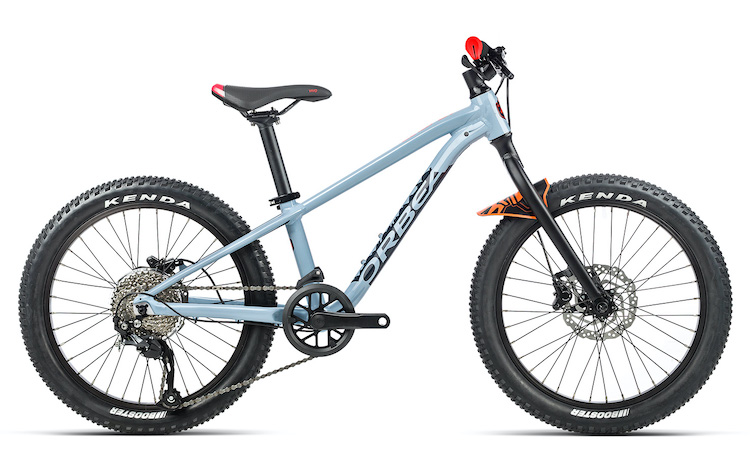 Orbea appear to have taken their adult Laufey range and shrunk it so that kids can have a blast on the trails too!

Cube have a good range of different style kids bikes, and the Cube Acid 200 is a good choice if you're looking for the type of versatile bike that is equally suited for riding on trails and roads.

It's not an all out mountain bike (Cube have other, more expensive models for that!) but we've included it here as we know many people want a bike that serves more than one purpose and it seems reasonably easy to get hold of at the moment.

Cube's bikes are renowned for being robust - the German engineering means they're build with longevity in mind - we have reviewed a number of their bikes over the years and have always been very impressed. 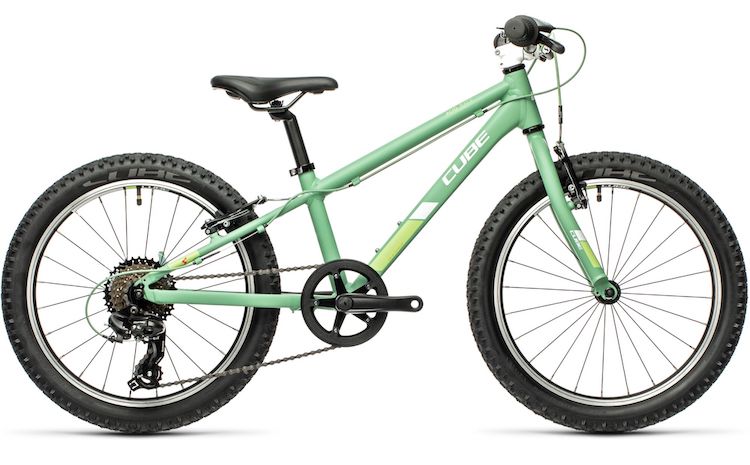 Key data for the Kona Makena: 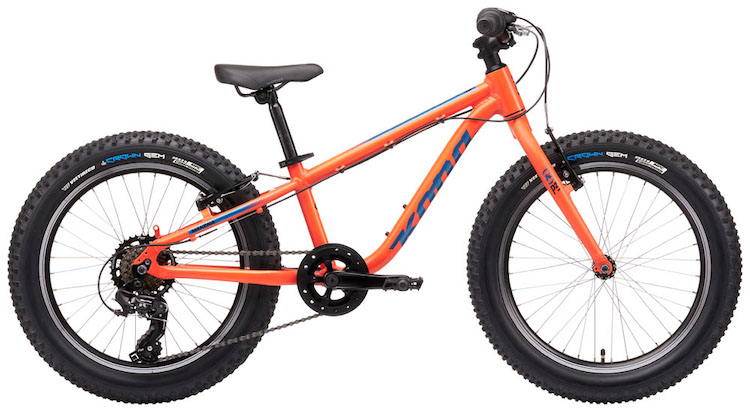 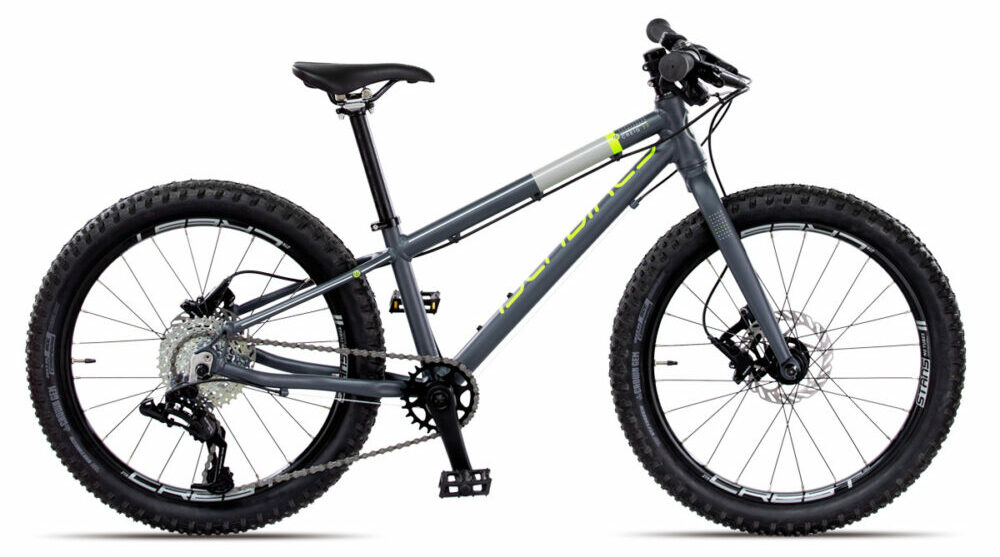 The Islabikes Creig 20 is a lightweight mountain bike for younger riders aged 6 to 8 years old who want a bike that can handle anything, from the local woods to trail centre adventures. The Creig 20 weighs 7.7kg meaning it is easily manoeuvrable and takes well to different terrains.

The Creig 20 features a lightweight aluminium fork rather than a suspension fork to keep weight down for the smaller rider.

It also features a narrow-wide 36T chainring and a wide-range 11-34T cassette which is a big benefit, particularly in a hilly area.

Whyte mountain bikes are some of the most desirable bikes around at the moment - go to any trail centre and you're bound to see loads of them in the youth 26" wheel and larger adult sizes.

The 203 is their 20" wheel offering for the younger age range and is built around a lightweight aluminium frame in keeping with the current trend for long and low geometry.

Cabling is routed internally so there's definitely a clean look to the frame, plus there's a set of 140mm hydraulic discs to keep things in check.

The transmission comprises SRAM's X4 grip shift to change between the 8 gears, with a 28 tooth chainset matched up to an 11-36T cassette to give a good range to tackle a variety of terrain.

We first saw the Whyte 203 at the 2018 Cycle Show at the end of September, which is going back some time now, but it was certainly a great first introduction to this cracking looking little bike. 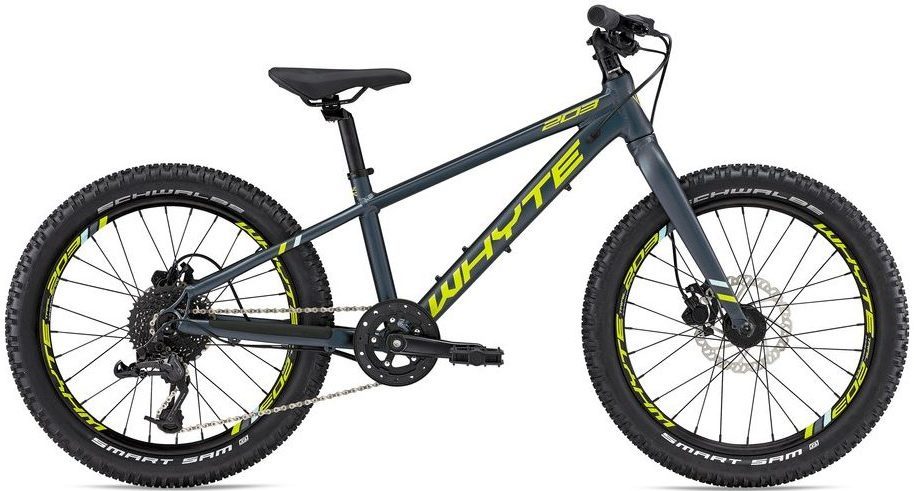 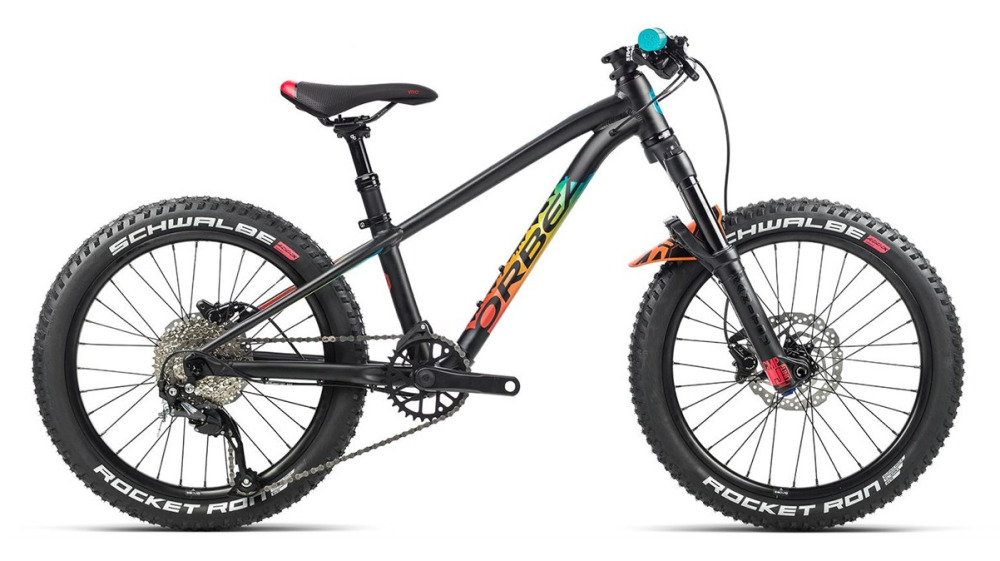 Orbea appear to have taken their adult Laufey range and shrunk it so that kids can have a blast on the trails too. The H10 is the top model in the range and comes equipped with a quality front suspension fork by Manitou with boost spacing and providing 100mm of travel. There's also a dropper post fitted.

I have a soft spot for Orbea - the bike builders from the Basque country - as I have owned, ridden and loved one of their road bikes. I also like the fact that they take kids bikes seriously, and are creating some fine examples that are scaled to suit.

There are 7-speeds to choose from and a Shimano thumb shifter to help you change between the useful range of gears that comprises a single chainring at the front to keep things nice and simple.

Stopping is taken care of by v-brakes, and there's a set of chunky tyres to give grip during your (socially distanced) off-road adventures. It's available to buy in three colour schemes.

So there you have it. A great selection of kids 20-inch wheel mountain bikes that will have them tearing up the trails in no time. This is just a small selection of what is currently available, so if you feel another bike should be added to the list, please get in touch via Facebook as we'd love to hear from you. Happy riding!

Please check out some of our other articles:

Posted on June 21st, 2022 by Penny Millar in Mountain bikes 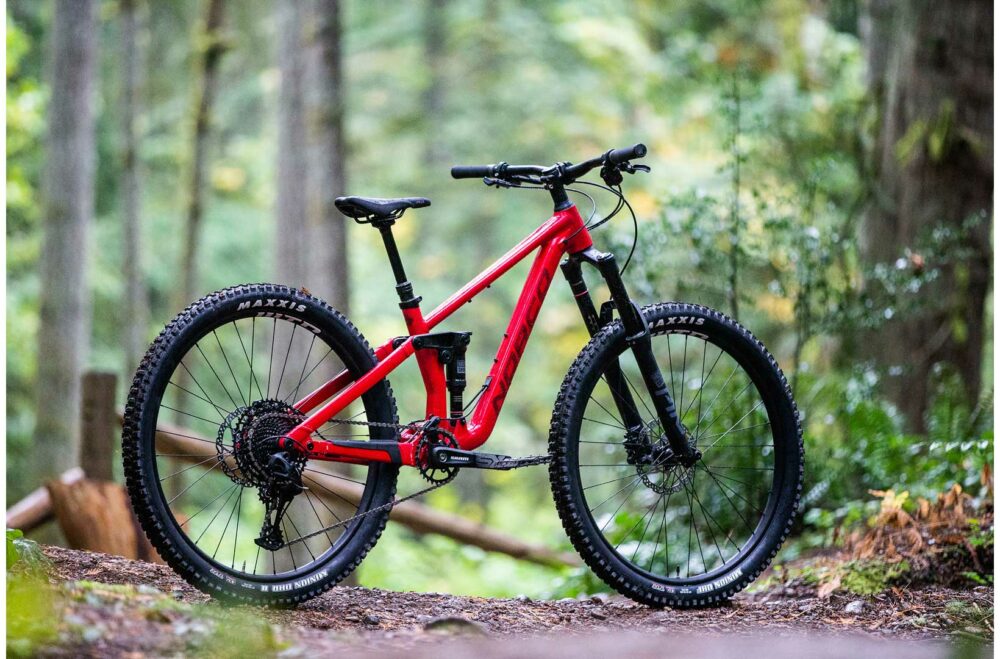 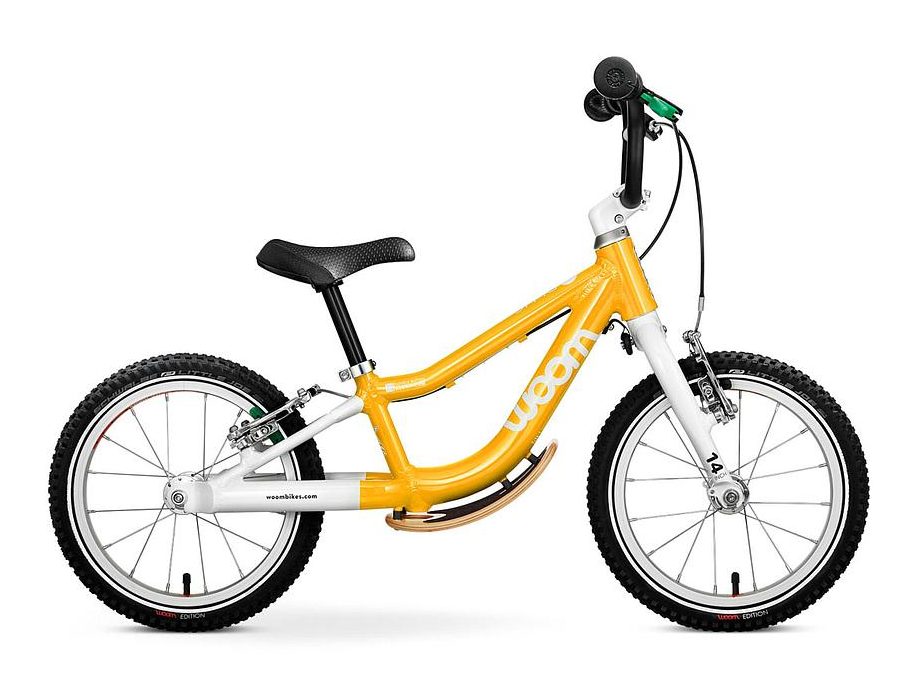 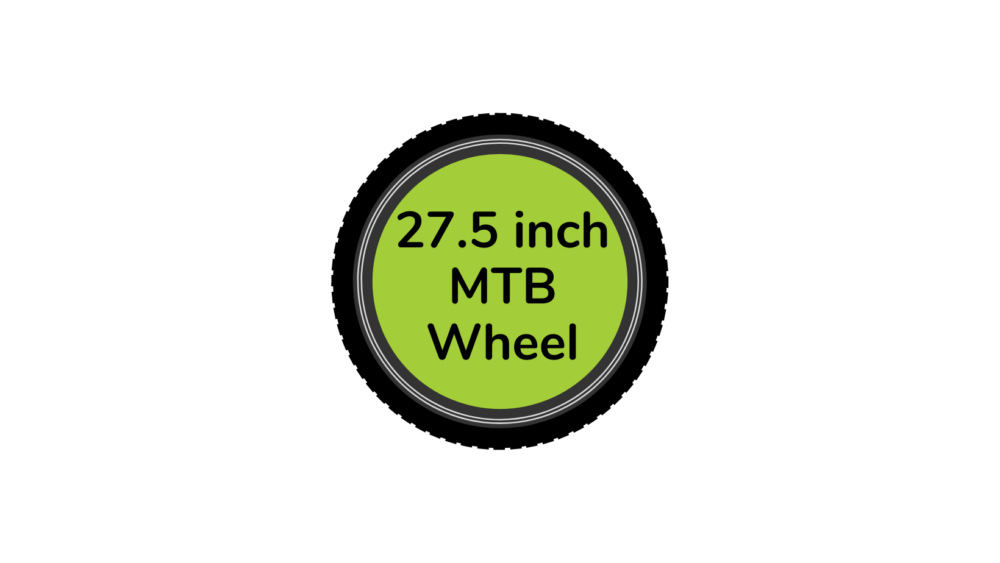 I was very close to pulling the trigger on a Vitus 20plus but in the end have gone for a Bergamont Bergamonster Plus which is very similar in spec and with a 12% discount at Hargroves Cycles came in cheaper than the Vitus. I’ve immediately converted it to trigger shift with an £8.95 shifter from Amazon and it seems spot on.

Does somebody knows what the weight of Saracen Matnra 2.0 is? I have looked everywhere and can’t find anything 🙁

Hi Ruta – Saracen choose not to publish the weights of their bikes (they’re not alone in this, Giant are currently the same). If you contact them directly via their website they may choose to share this info with you. Karen

Thanks! It’s just annoying that one can not find the weight of a bike, even when you search everywhere for a week. Some places says 7,1, some 8, some 8,2 or 8,5 kg – but these are all places you can’t really trust on. Maybe someone here has this bike at home and can weight it for the rest? I really would like to order it, but wat to know exact weight before it…

I have had the same query.It is a critical piece of information in a chids bike.Why can Saracen not provide the information with the caveat “approximate” then I won’t be able to sue them form millions and millions of pounds(no, I wouldn’t)

Small correction: The 2019 Specialized Hotrock has only 40mm of travel on it’s SR Suntour XCT-JR fork, not 50mm. Changed from 2018?

Hi Steve, Thanks so much for taking the time to point that error out – I’ve updated it to reflect the forks are 40mm of travel. Glad you found the article helpful, Karen