It’s Saturday night, and we’ve just put the boys to bed / tidied away the carnage they’ve left behind / tidied away the carnage we’ve left behind and got ourselves straight ready for a relaxing meal and glass of wine. But before that can start we embroil ourselves in a conversation that’s probably going on in thousands of households up and down the country, namely what the plans are for Sunday, what jobs need doing and what the weather is supposed to be like.

Well according to the one BBC weather man that has gained my trust for not being wildly inaccurate with his predictions, it’s going to be a cold but fine day. That’s Sunday sorted then – all jobs are off. We’re going cycling! 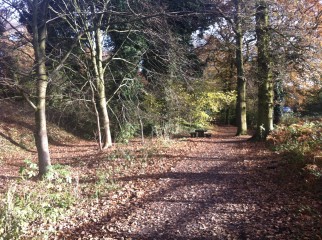 So we donned thinking caps to discuss where to go, however after only a few seconds they were no longer needed and flung aside with abandon.  The venue for our adventure – Delamere Forest.

The decision an easy one, as K and I both wanted to check out the beauty of the autumn leaves – the reds, golds and ambers that would hopefully be illuminated and made even more radiant by the beaming sunshine that we were hoping for. Hmm, we’ll see.

Early next morning, I set about cleaning and lubing, and pumping and tightening so that the bikes were in fine fettle and raring to go before being hoisted up onto the roof mounted carriers.

It amazes me how good a buy the carriers were (Thule ProRide 591), as once you’ve got the hang of setting them up they are an absolute doddle to use. True they’re not the cheapest, but they’re good quality and give me confidence when I’ve got three bikes perched on the roof. 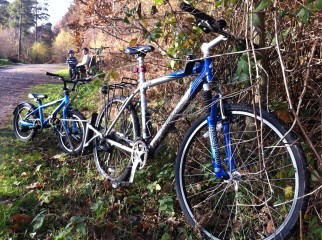 Now it was at this point that it dawned on me that there are four of us with cycling requirements, with T now four he too can sit astride a 16″ wheeled bike (he’s not fully up and running yet, but getting there in style) and so we needed another bike rather than a front or rear seat to stick on mine. There are currently three racks on the roof – I think a fourth is now imminent.

Thankfully the boot of the car is huge, so I easily ‘forced’ T’s Islabike and the FollowMe tandem coupling in along with our other riding gear.

So with the car packed up and the sun beaming down, we set off for the forest with smiling faces. Well, this was after we had to return to the house (twice) for things we’d forgotten to pack! 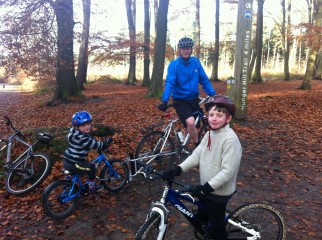 Twenty minutes later we roll up at the Visitors Centre and the boys speedily got into their bike gear while I unloaded the bikes.

Having already used the FollowMe for rides out, it took a couple of minutes to hook it onto the back of my bike and then hitch T’s Islabike into place. We were ready to hit the trails.

On the days preceding this trip we’d been on the receiving end of levels of rain that Noah would’ve built a boat for, so the ground was extremely boggy in places.

Of course, this was just what the boys wanted, so within 500 metres we had soaking wet clothes and mud-splattered faces complete with beaming toothy grins. Looking and listening to the giddy laughter I felt pleased we’d made the decision to get out while the weather was good.

Considering the amount of bumpy track we negotiated, the FollowMe Tandem performed faultlessly.

So much so that if it hadn’t been for the extra weight on the back I would’ve hardly noticed T was there (well, apart from the occasional cry of ‘go faster daddy’).

As the sun was starting to dip down behind the trees and the light getting low, we made our way back to the visitors centre.

At this point, T the four year old, pointed out that they had a car wash for bikes which he obviously fancied using, so we purchased some tokens and set to removing the mud and grime from the four bikes, with T and N having a ball spraying the bikes (and mummy) until they gleamed. 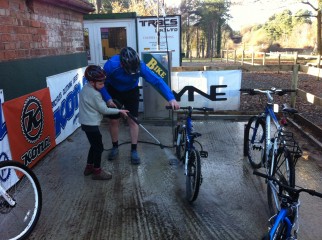 Unfortunately, our day in Delamere had come to an end. We’d seen the sun shining through the autumn leaves on the trees, and put the FollowMe (and T) through it’s paces on the tracks of the forest, but now it was time to cycle back to the car (trying to get the boys to avoid massive muddy patches), rack the bikes up and head home for a warming hot chocolate to finish off a brilliant autumn day.

Disclosure – We were kindly sent the FollowMe Tandem to review, but were not paid to write this article. All opinions are our own.

If you’d like to buy your own FollowMe tandem you can do so using the links in this article – we may get a small commission payment which helps us keep the website going. Thanks for your support.

Have you cycled with your kids this autumn? Let us know about it in our comments section below

For more ideas on where to cycle this autumn, check out our Family Cycle Routes section.

Other articles you should check out whilst you’re here: