If you watched any TV at all over the summer, you would have noticed that Sainsbury’s were a corporate sponsor of the Paralympic Games. As a result of this partnership a number of Paralympic medallists have been visiting stores all over the country with their medals. We were lucky enough to have Rik Waddon – Paralympic GB cyclist and silver medal winner in the mixed C1-5 Team Sprint event at our local store, so imagine the scene on a Saturday morning at 9am trying to curb the excitement of two cycling mad and very excited boys, who’d decided to dress in their London 2012 t-shirts and take their Wenlock and Mandeville mascots along. It was as though they’d dined for hours on nothing but Haribo and orange squash. 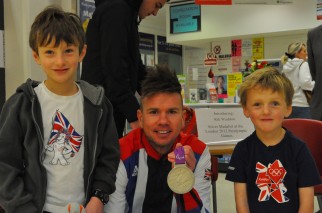 Rik greeted us with bright eyes and a cheery smile, and was keen to show off the two medals on the table in front of him, highlighting the contrast in weight between the silver medal from Bejing in 2008, with the much more substantial London 2012 silver – a fine example of Britain at its best. He posed for the first photo of the day and the boys held the London 2012 silver medal – it actually took both of them to hold it aloft. Having been bouncing off the ceiling all morning at the thought of meeting a Paralympian, they suddenly went all coy, leaving it to me to ask all of their questions.  They looked on wide eyed as they learnt that Rik does get to keep his medals for ever, he has a huge Mandeville Paralympic mascot at home and his top speed on the flat can approach 50 mph. 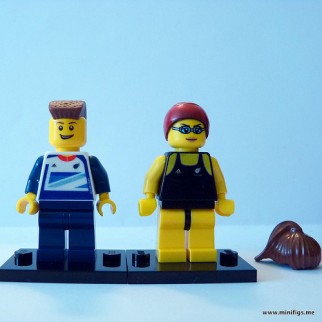 Part of the reason the boys were speechless in his presence revolved around a discovery they made the previous night, which elevated Rik Waddon from the status of impressive athlete to complete legend. Rik has his own Lego figure (along with his wife Natalie Jones – the Paralympic swimmer) which, for two boys who spend a large proportion of their waking hours building Lego masterpieces, is a previously unheard of pinnacle in life.

It appears Rik is impressed too – he was phoned up by the creators, Minifigs.me, who asked if he still had the quiff that gained so much attention at London 2012, and with the answer an affirmative, said hair is now available for Legomen everywhere to wear with pride.

How many bikes does a London 2012 medal winning cyclist have?

Their final question concerned the number of bikes a Paralympic cyclist has, and Rik clearly impressed the boys with his tally – 3 BMX’s, a road bike, a time trial bike, a mountain bike, a winter bike and a track bike. As the storage of bikes is a bone of contention in our house, I asked where he kept them all, and he confessed to storing some of them in the loft as the garage was already full (of medals probably!).

The loft is accessed via the bedroom and he joked that this caused some issues with Natalie. To my left I noticed Chris with a smug look plastered across his face, as he realised that Rik has got him off the hook for the numerous bikes and parts that he’s squirrelled away all over the house. Thanks a lot Rik! As Rik’s time is carefully managed by Sainsbury’s, I’d previously agreed with his publicist to return at the end of the day for an interview, so we said our ‘thank you’s’ and departed leaving Rik in prime position at the store entrance awaiting the next visitor, and my boys with some fantastic memories of meeting their first Paralympic cyclist.

Later in the day I see he’s managed to send out one tweet saying ‘it’s rammed’, and when we return at 4pm he’s still in full swing. People are queuing to have their pictures taken with a Paralympian and hold the medal, and Rik obliges with a smile each time. Several times I hear the exclamation of “Wow it’s huge!” followed by coughs and embarrassed sniggers, and wonder how many people will spell his name right when they post their photos on Facebook.

Managing to keep smiling and be courteous for 8 hours continuously is testament to Rik’s personality and work ethic, but then this is nothing compared to the punishing training schedule (which he loves by the way) he goes through every day. Observing him in action with the public brings home the reality of life as a top athlete; the demands on your time that form part of a package that is already bursting with a hectic schedule of training and competitive events.

Twice he packs away the medals, and twice unpacks them to show curious shoppers, before finally the meet and greet is over. Clearly exhausted from the day, Rik looks weary and his eyes are red, but he agrees to the interview.

Our conversation starts with his early years.  At the age of five, he was knocked off his bike by a car, an accident which he says “left me in a bad way” and resulted in him developing Cerebral Palsy, and spending years in and out of hospital. His parents were given the choice of placing him in either a specialist or mainstream school, and opted for the latter.

This was 1982. Rehabilitation didn’t really exist, and the schools he attended were not equipped with facilities to deal with disabled pupils, so as a means of combating this Rik hid his disability as best as he could. I don’t pry, but sense this was a difficult period in his life, and it’s uncomfortable to hear an athlete dressed in the distinctive Paralympic GB tracksuit saying that he hated PE at school because he was always the last to be picked, due to being “the disabled kid”. But things were set to change.

When he was 14, Rik Waddon found himself, like millions of others, glued to the TV watching the Tour de France. Inspired by what he had seen, he decided to give cycling another go and found it was something he could do without being overly hindered by his disability. Considering what had happened in early life I ask how his parents took this news. He laughs, saying that even now they still worry about him riding, but when he talked his intentions through with them, they supported him all the way.

At school, he didn’t let on about this new found interest, and when he joined Chester Road Cycling Club at the age of 16, he failed to mention his disability. “No one said anything, although I’m sure they noticed” he says, adding with a grin “but I was soon beating them, so it became irrelevant”. 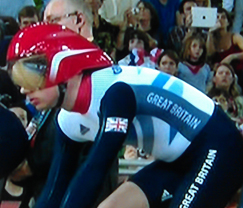 Rik talks candidly about how sport for disabled people wasn’t really mentioned at this time, and he first heard about the Paralympic cycling team in early 2000.

The selection process for Sydney was over and the team picked, so he was kept on record and told to come back the following year. Hard training and playing the waiting game paid off, as he was selected for the 2001 European Championships, coming away with an impressive tally of three gold medals.  Since then his career has rocketed, with an almost continual haul of gold and silver medals at European and World Championship level on the track, and a superb gold in the Road Time Trial at the 2010 World Cup in Spain.

As you look into Rik Waddon’s eyes, it’s obvious that this man comes equipped with a steely resolve. Despite silver medals from Beijing and London he still has the hunger and desire to go further, stating he won’t consider retiring until he gets at least one Paralympic gold (he missed out by 0.065 seconds in London), and would happily trade his two other medals to get his hands on it.

He acknowledges that it’s unlikely he’ll be able to match his wife’s haul of two gold medals, but he’s clearly not going to rest until he hears the national anthem in Rio. Having talked about his own journey, I ask about the advice he has for those who have been inspired by the summer of sport.

He says the key is for youngsters to get active, and achieve a good base level of fitness. “Swimming is a great sport for disabled kids – it’s non weight bearing, and all you need is a swimsuit, some goggles and a couple of floats and you’re away”. Once that fitness is achieved, he advocates letting the child decide what sports they want to get into, saying “Just let them do their own thing”.

Rik believes one of the biggest barriers to disabled kids taking part in sport can be the medical profession, who tell parents that their child will never be able to walk, swim or cycle. Parents are then afraid to go against medical advice, and this can lead to children being cocooned. Advocating the reverse, Rik’s passion is clear as he talks about a young boy he knows. When they first met, he needed to use a walker and didn’t do any sport, a decision taken in the main by his parents. Inspired by meeting a successful sportsman, and one with Cerebral Palsy, the boy slowly began to take part in sport at school and is now, several years later, walking unaided. “Who knows – if he carries on at this rate, he could end up a Paralympian by the time he’s a teenager” says Rik.

As with virtually every other cyclist in the UK at the moment, Rik is concerned about the amount of traffic on the roads, and effect this has on safety.  As a professional cyclist, he has an added concern for the future of his sport. At a time when Britain is seeing medal success in cycling, the road safety issue could be a barrier to the success of future generations, as so many training miles have to take place on the roads.

When I ask what he’ll do when his cycling days are over, he looks nervous for the first time. Cycling has been his life for over 20 years, and it’s hard for him to imagine doing anything else.  He says that if he doesn’t get the gold in Rio, he may still be trying when he’s 65, and I’m not entirely sure he’s jesting.

He would like to move into media, joking that whilst he’d prefer to do TV, he’s got a face for radio. In fact, nothing could be further from the truth – with his welcoming smile and trademark mohican, he’s got one of those faces that people remember. As for the hair, having once been renowned for the number of styles he’s sported, he now finds himself stuck with this one “as everyone expects me to have this wild hair”.

The grin is back as he says “At schools all the kids love it – they come up and say “Can I touch your hair mister”, and the teachers worry that the next day half the class will turn up sporting a mohawk!” And with that our time is over. Rik Waddon and his trademark hair are off. You’d think that after a long day of handshakes and photos he’d be heading home to relax, but no.

Having just found out that a Paralympian is in town, the leader of the local guide unit asked if he’d kindly call in as they are having a London 2012 themed event. Not wanting to disappoint he readily agrees, guaranteeing that even more youngsters will go home inspired by having met a star and fixing their gaze upon his hard earned medals. Perhaps one of them will even make it onto the podium and be immortalised in Lego forever.