Watching track cycling with the kids is a great family day out!

Home » blog » Watching track cycling with the kids is a great family day out!

I’ve just been reading about the UCI Track Cycling World Cup, which is taking place Lee Valley VeloPark, Queen Elizabeth Olympic Park, London from 14th to 16th December 2018.  This has brought back memories of when we were lucky enough to take our two boys to see the final day of the 2013 Track World Cup at the Manchester Velodrome.  Here is a repost of the blog, which I originally wrote just after the event. None of us had ever been to a Velodrome before, so it was one of those times when you never quite know what you’re letting yourselves in for.  Would it be suitable for the boys (N and T), would they sit through over 7 hours of cycling, and would they enjoy it? I can confirm without doubt that the answer to all three was a resounding YES!

Thankfully the night before I tweeted that we were going, and got a really helpful hint from @PinkMtbr

Some neighboring spectators have just stripped their toddler down to her nappy. Wish I could strip to my underwear. #boiling

Thank goodness for Jennifer and the power of Twitter – if we’d turned up in our winter gear I think the answer to all three questions may have been no!

What do you wear if you’re going to see track cycling with the kids?

Sunday morning dawned and we excitedly piled into the car for the journey to the Velodrome. I’d dutifully packed a bag full of cold water, and we were all wearing clothes more suited to August than November. When we arrived, I wished we’d brought some warmer outer layers for the boys, as it was a 10 minute walk from the car park (by Manchester City’s stadium) to the Velodrome itself, during which the boys got rather cold. However, once inside we quickly warmed up as it was a packed house and the heating was on full blast! The boys had been keen to wear cycling jerseys, which was a blessing, as they have a 3/4 length zip, which gradually undid more and more throughout the day.  A cool cotton shirt or vest t-shirt would have been another good choice, and I wish I’d put the boys in shorts for the afternoon session, when it really heated up.

By the end, N had lost his socks and shoes too, which I’m sure went down well with those sat around us!

Is track cycling a good family day out?

Yes – it was absolutely brilliant for our boys, who were aged 7 and 5. The commentator made the races easy to understand, and the action was non-stop.  There’s plenty to see at all times, so very little chance of them getting bored. I’m glad we bought the programme as it was clearly written, so our 7 year old could follow what was going on.  The seating was such that our 5 year old was able to see over the head of the person in front.  They loved getting behind the British riders, and I thought they were going to scream themselves hoarse when Matt Crampton was going in the Bronze Medal final of the Mens Sprint!

I took with me a present that N had received for his birthday, The Usborne Spectator Guide to Cycling

which is a deck of information cards covering Track, Mountain, Road and BMX.  They were able to look at all the cards relating to track cycling, which helped keep them entertained in the very short gap between each race, and kept me busy trying to pick them up from the floor, when they got dropped when things got exciting.  With hindsight I wish I’d read up a bit about the rules of the different events in advance, so be able to answer more of their questions about what was going on. From my perspective, I’ve never really been a huge fan of watching Track Cycling on the TV. I know I’m risking scorn here from diehard fans, but I do find a 120 lap Points Race can become quite tedious at times!  However, I’m a complete convert to watching track cycling as a live event.

The excitement and the drama is incredible, which doesn’t always come over on the screen.  The use of music in the Sprint cat and mouse section was brilliant, the commentator got the crowd going in each and every race, and the sheer speed of the cyclists was quite breathtaking. I even found myself on the edge of my seat screaming loudly during the Women’s Points Race, which I wasn’t expecting – I’m converted!

Would the boys sit through over 7 hours of track cycling at the Manchester Velodrome?

Yes – they did sit through hours and hours and hours of cycling! We arrived half way through the morning session (which started at 9am).  There was one moment at the end of the morning session (which was mainly the qualifying rounds) where they started to get a bit fractious.  Thankfully I’d brought some colouring sheets and crayons, so out of the bag they came and the boys knelt down and did a few minutes of colouring while balancing the paper on the seat. However, the racing was far more exciting and so they soon sat back up again.

There was no doubting that the afternoon session held their attention a lot more, as this was when the finals took place.  At the time I did think that maybe we should have just turned up for the afternoon, but thinking back on it now, the morning prepared them  really well. They got to ask all their questions about each event, find out who the main contenders where, and then were really fired up for the finals.

Would the children enjoy the track cycling at the velodrome?

Again, a resounding yes!  Of course there were a few moans and groans at times (usually about being too hot, hungry or thirsty), which is what I’d expect on any family day out! The cycling was edge of the seat action at times, and they were beside themselves with joy when Laura Trott won gold in the Omnium. They wanted to stay right to the bitter end, to see the Great Britain Cycling Team (who finished second in the medal standings with eight medals – four gold, two silver and two bronze), receive recognition for leading the UCI Track Cycling World Cup standings after the first round. They loved seeing the Derny Bike, which paced the Women’s Kieren riders until two and a half laps to go, and were particularly delighted when it broke down and Peter Deary, the man with the brilliant job of riding the Derny Bike, returned on a bright green replacement!

Watching World Cup track cycling with the kids – where will it lead?

So, all in all, we had a brilliant day out at the Manchester Velodrome, watching the UCI World Cup track cycling with our two boys.

Now, fast forwarding 5 years, it’s fabulous to be able to say that my two little Cycle Sprogs are now aged 10 and 12 and riding the boards themselves! But that’s another story, for another day…… 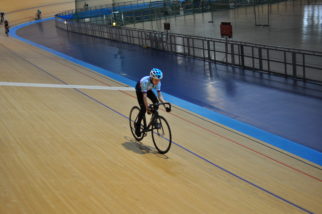 For more information about the Manchester Velodrome, which is part of the National Cycling Centre, visit http://www.nationalcyclingcentre.com/

The British Cycling website has loads more information on track cycling, from grass roots level through to Team GB at http://www.britishcycling.org.uk/track