It’s an exciting day for all Flying Fergus fans!!!!  The brand new Flying Fergus Book – The Cycle Search and Rescue has been published! 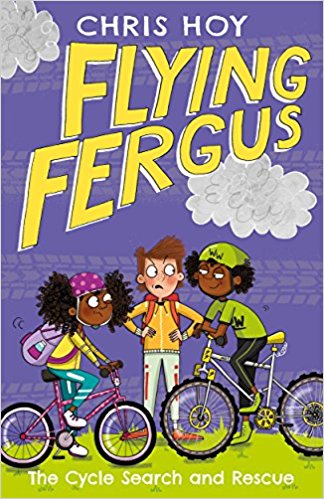 The Flying Fergus series, by Olympic legend Sir Chris Hoy, are a firm favourite with our eight year old. The books follow the exploits of young Fergus Hamilton and his cycling team, the Hercules Hopefuls. Weaved in amongst the cycling are Fergus’s visits to the magical world of Nevermore in search of his long lost Dad.

I know he’s going to be desperate to get his hands on this latest instalment in Fergus’s adventures.

Sir Chris is due to become a dad again for the second time later in the year, so he really knows what sort of tales young cycle mad kids love at bedtime. He’s ably assisted by award-winning author Joanna Nadin and the fun illustrations are by Clare Elsom.

The sixth book in the series, The Cycle Search and Rescue promises to be another exciting tale, set in the remote highlands of Scotland.

Those of you who haven’t read book 5 yet, should avert your eyes, as the plot line gives away the finale of the previous tale.

After their amazing win at the National Championships, Fergus and the rest of the Hercules’ Hopefuls are keen to get back to training as a team – it was brilliant to lift the trophy alongside the Wallace’s Winners, but now that Calamity Coogan and Minnie McLeod are back on form, the two teams want to go back to competing against each other rather than together. But – to everyone’s disgust – the Board are adamant: the team that won the Nationals is the only one that can compete in the upcoming Internationals. So in order to qualify, the two teams must work together as a squad.

Wesley is furious and Fergus is disgusted, so Grandpa and Choppy come up with a plan: a training weekend in the Highlands to help them bond.

But as soon as the two teams arrive at the boarding lodge the squabbles break out again. Daisy and Minnie will have to share a dorm with Belinda Bruce, and Choppy is outraged not to have his own private quarters. Then Wesley challenges Fergus to a head-to-head cross-country race – first one back to the camp wins. The weather is closing in, and the route is hilly and challenging. When Wesley and the others don’t get back to the boarding house, and a storm starts to rage outside, Fergus knows their only hope is to get insider information from someone he knows will have the answers: Dad. So he’s got to get up to speed and back to Nevermore before Wesley and his team come to harm in the hills…

Flying Fergus 6 – The Cycle Search and Rescue is available on line from Amazon, and Waterstones, plus from your local bookshops, priced £4.99

Follow Cycle Sprog on Facebook to keep up to date in all the latest news about family cycling.