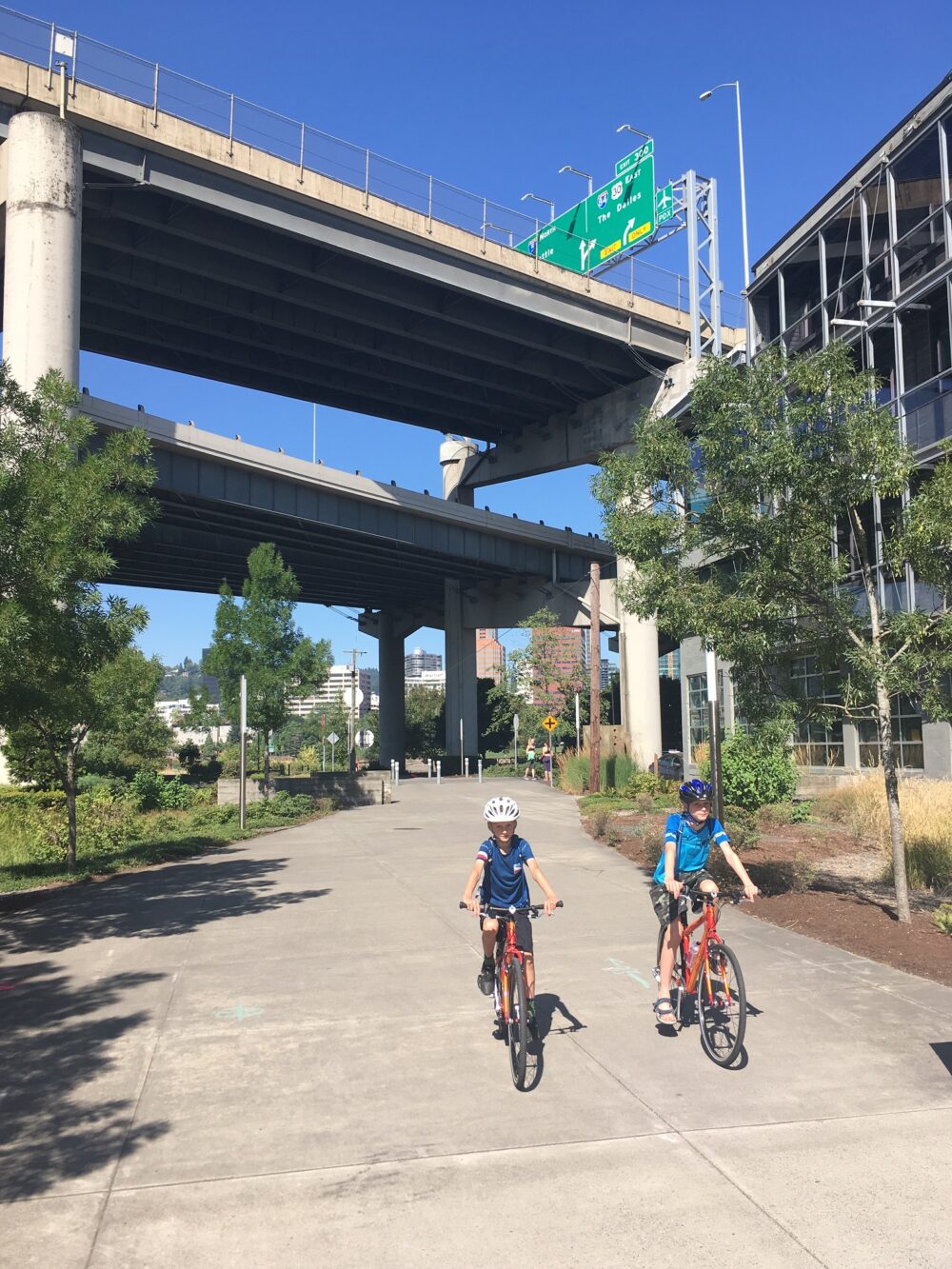 After three nights, we had to move on. We’d cycled, visited the Islabikes showroom, spent hours in Powell’s – the USA’s largest bookshop – and eaten at some of the fantastic street food carts and restaurants, plus drunk some amazing coffees and beers.

We packed our bags and set off on the road once more, vowing to return to Portland again one day. And so we moved into the third week of our trip. This is the point that after a traditional one week’s holiday we’d have already been back home for a week. Or, if we’d gone away for a fortnights holiday, we’d be heading back. Yet, we’re only half through our road trip and it’s starting to feel like proper travelling. We’ve got quicker at pitching and striking our tent, and at entertaining ourselves on the road. The encouraging news is we’re all still speaking to each other – just!

Finally, we were heading away from the cities and coast (read about our experiences of cycling with the kids in Vancouver and not riding with them in Seattle in my earlier blogs), and heading towards the mountains, which means just one thing – mountain biking!!

After a night’s camping, we arrived in Bend, which is often listed in the top places to mountain bike in the USA. As soon as we arrived in the city (population just under 90,000) all sadness at leaving Portland vanished, and we were starting to lament only having 3 nights in Bend.  From the moment we arrived, it was obvious Bend is an outdoor lovers paradise, with more besides. There’s mountain biking from the city centre in the summer, and skiing during the winter. Plus it has 15 breweries. Had we just found Nirvana???

Our first afternoon saw us sampling some of the local food and coffee before heading to the Airbnb we were booked into. The local Mountain bike trails were painted onto the living room walls – this was boding very well! 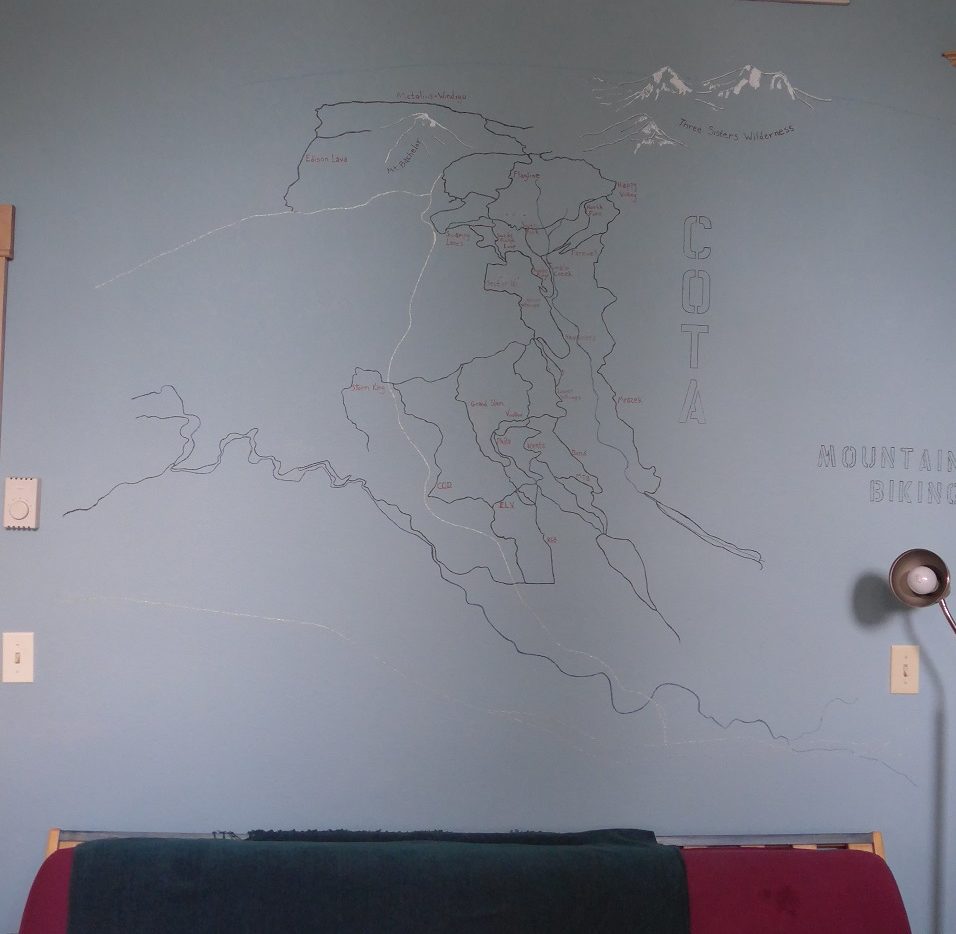 We then went to sort out our mountain bikes. We’d been recommended Pine Mountain Sports, who are based on the west side of town, within riding distance of the trails (great for us, as we couldn’t find a hire car company who would let us carry bikes). 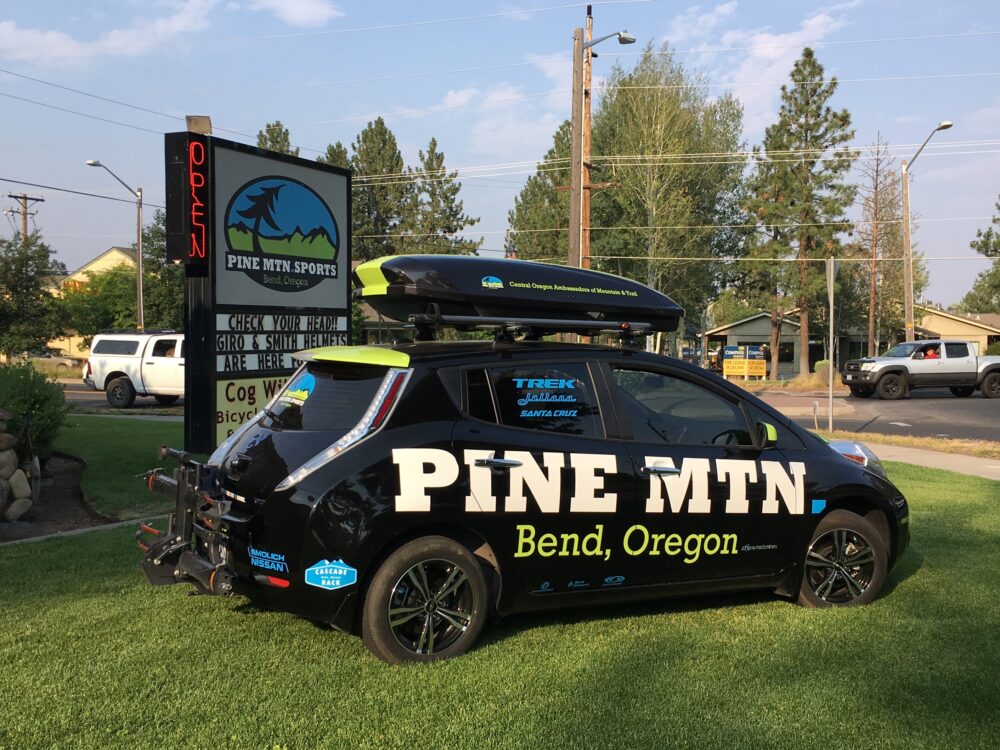 We were made to feel immediately welcome, and left about an hour later to go for a quick test ride on the bikes they’d selected for us. Chris was overwhelmed to be given a Santa Cruz Tallboy CC 27.5+ to borrow – it was the bike of choice for the season for Ed, manager at the store, and he was generous enough to let Chris ride it for two days. 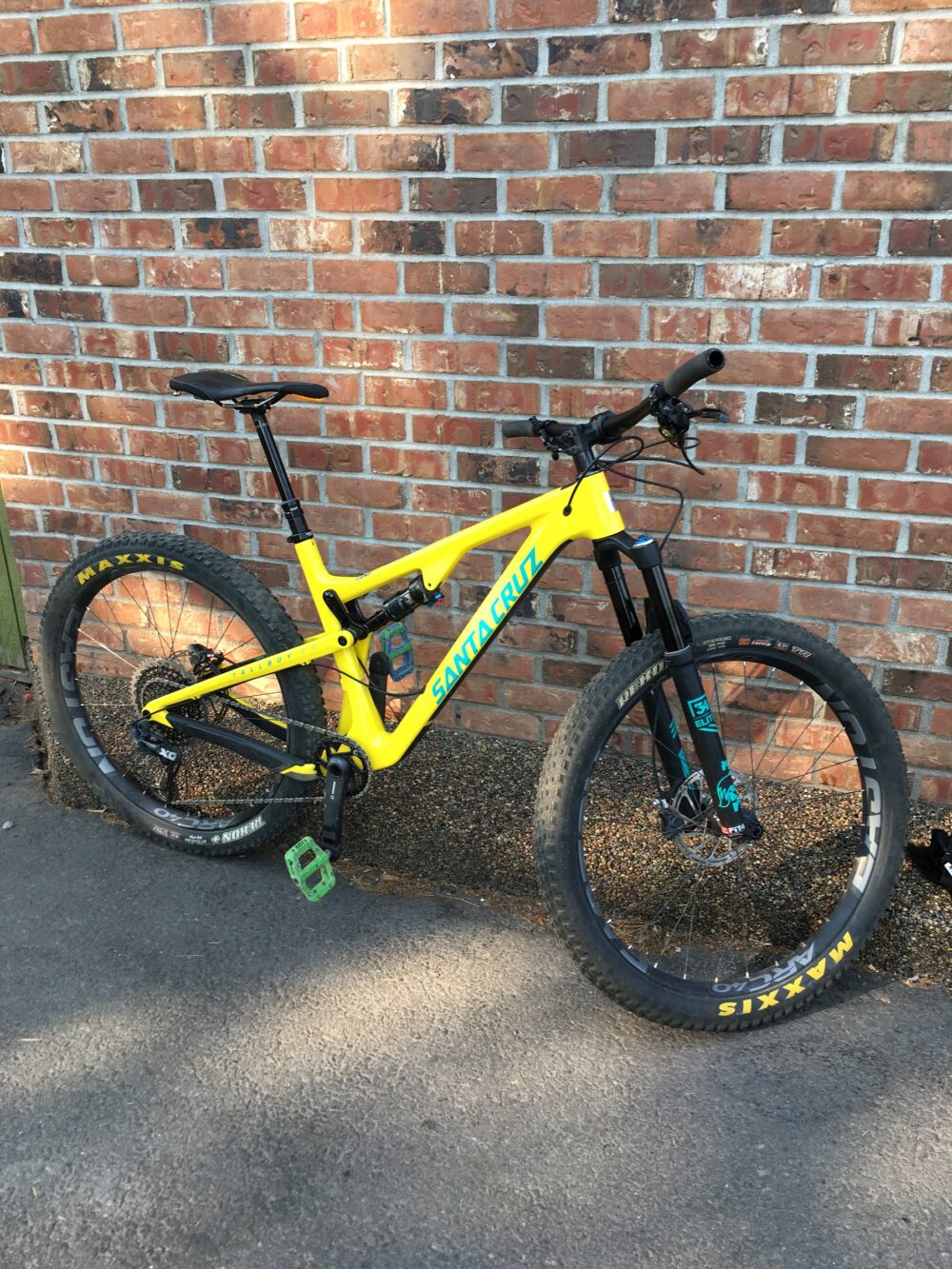 I was equipped with a 29” wheel Trek Fuel Ex 8 and 11 year old N a similar Trek Fuel Ex 27.5+ – Ed assured N he was going to have REAL fun with the ‘plus’ sized wheels and full suspension. 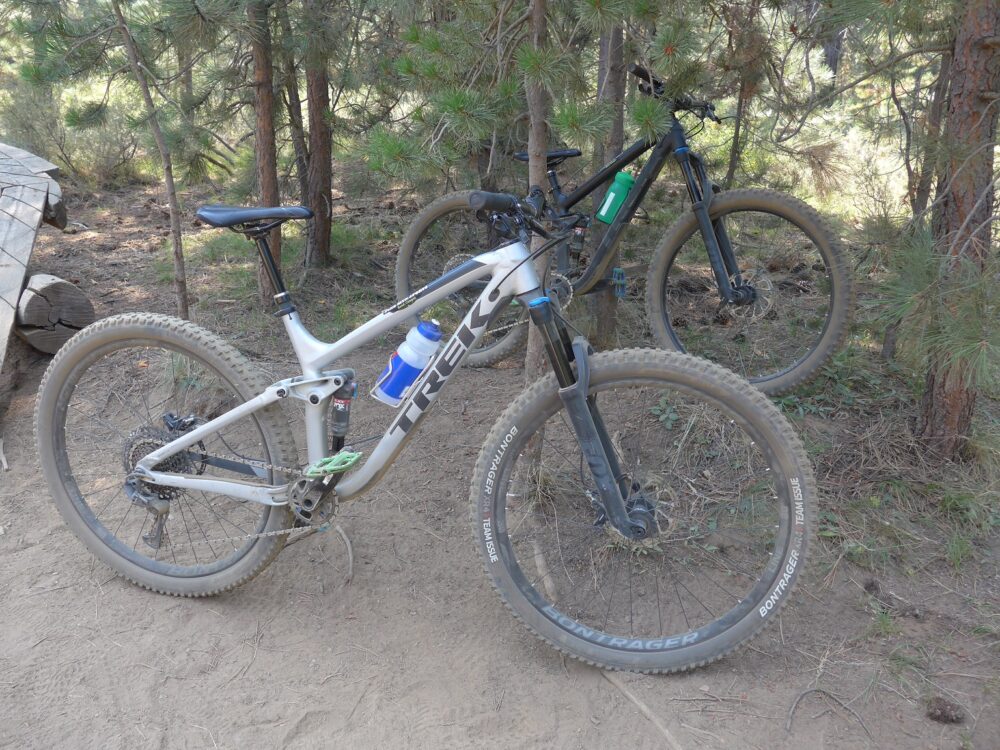 Now, 8-year old T has been riding a 24 inch wheel Islabikes Creig back at home, and in Vancouver had managed on a tiny 20” wheel bike. In Portland, he’s moved up a size to ride an Islabikes 26” Small Beinn. Suddenly Ed appeared with a 27.5” wheel Trek Cali SL.  My baby on a 27” wheel bike……. 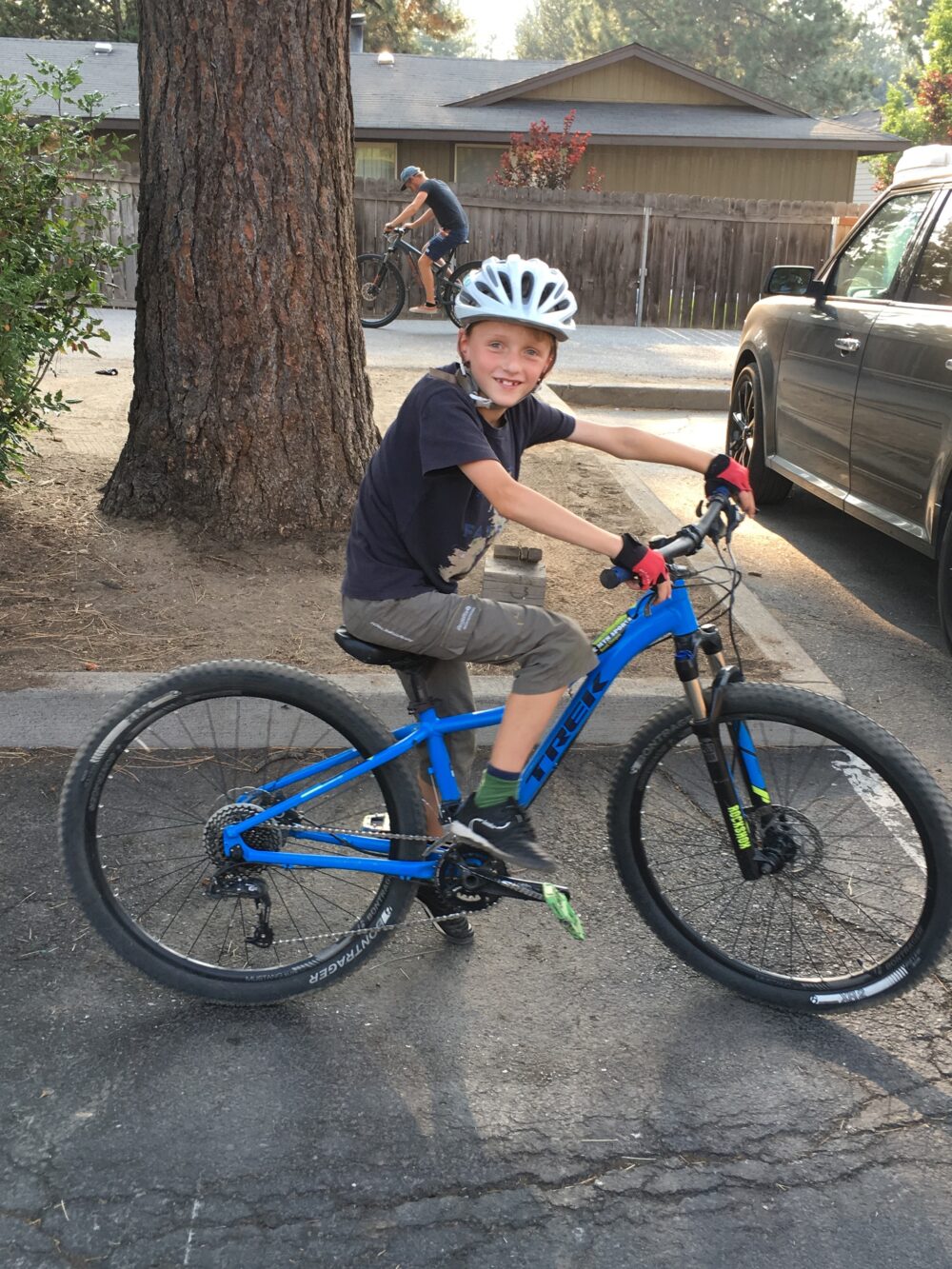 I hadn’t quite expected that to happen so soon! Plus, I was worried – I have trouble keeping up with him on the trails at home on his 24” – would I stand a chance with him on the 27” wheels?

We went on a quick half-hour test ride to check the bikes fitted OK, and even this quick ride showed us a Bend tradition – surfing on the Deschutes River. 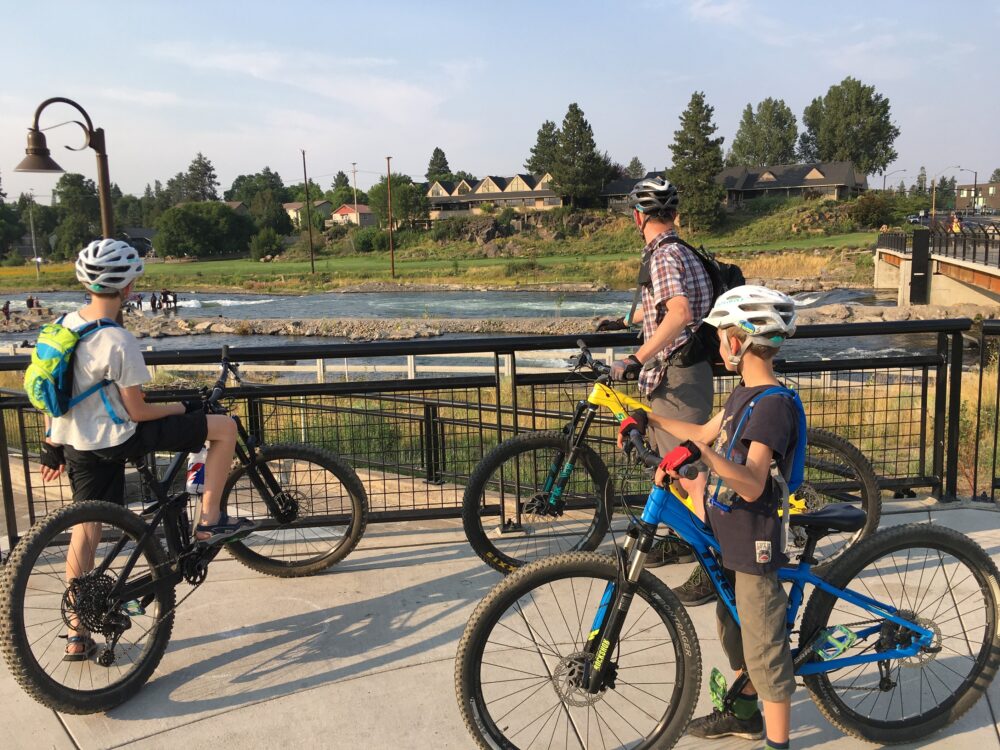 We were almost 200 miles from the coast yet watching surfing – unreal! Hanging out on the river in inflatables also seemed to be a classic Bend pastime if you’re not into surfing – this is one cool place! 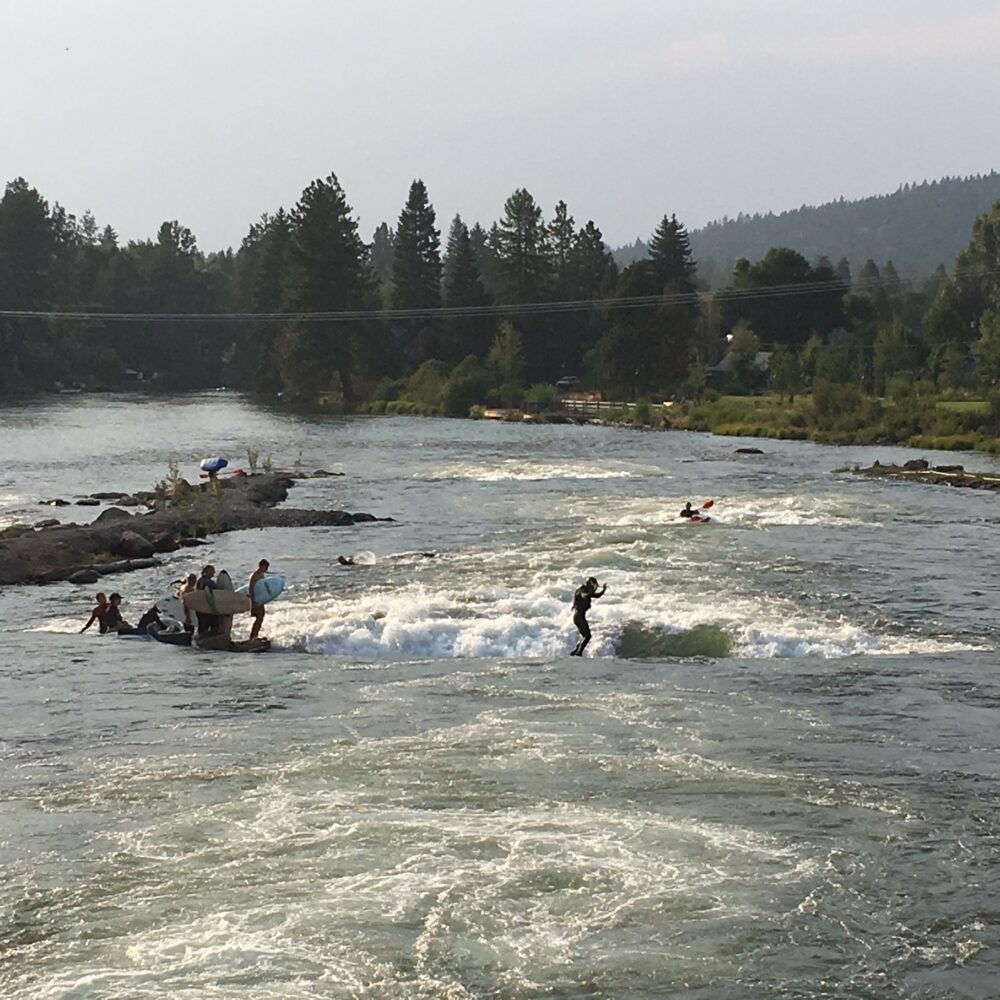 The next day we were back at Pine Mountain Sports by 9am to collect the bikes and riding up to the Phil’s Trailhead, where the real fun started. There’s so much to say about mountain biking with kids in Bend that I’m writing a separate post on it as it wouldn’t all fit in here (so make sure you’re following our Facebook Page so you know when it’s published). Suffice to say it was some of the best swooping single track we’ve ever ridden! At the end of both days we were all grinning from ear to ear.

The first day the boys enjoyed riding on the brilliant pump track before we set out on the trails. 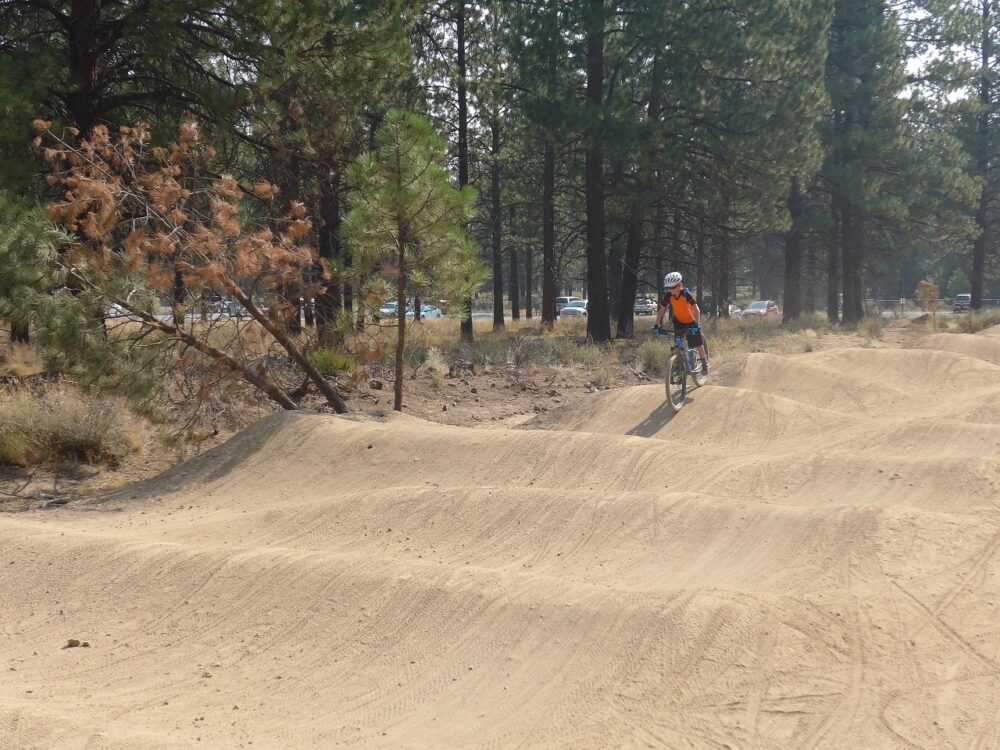 We climbed Ben’s Trail during the morning and descended the iconic Phil’s Trail back down to Bend in the afternoon. Both were fast, flowing singletrack, on a fine sandy dust, with very little in the way of rocks or roots to hinder our progress. Such faster and smoother than we’re used to in the northwest of the UK. 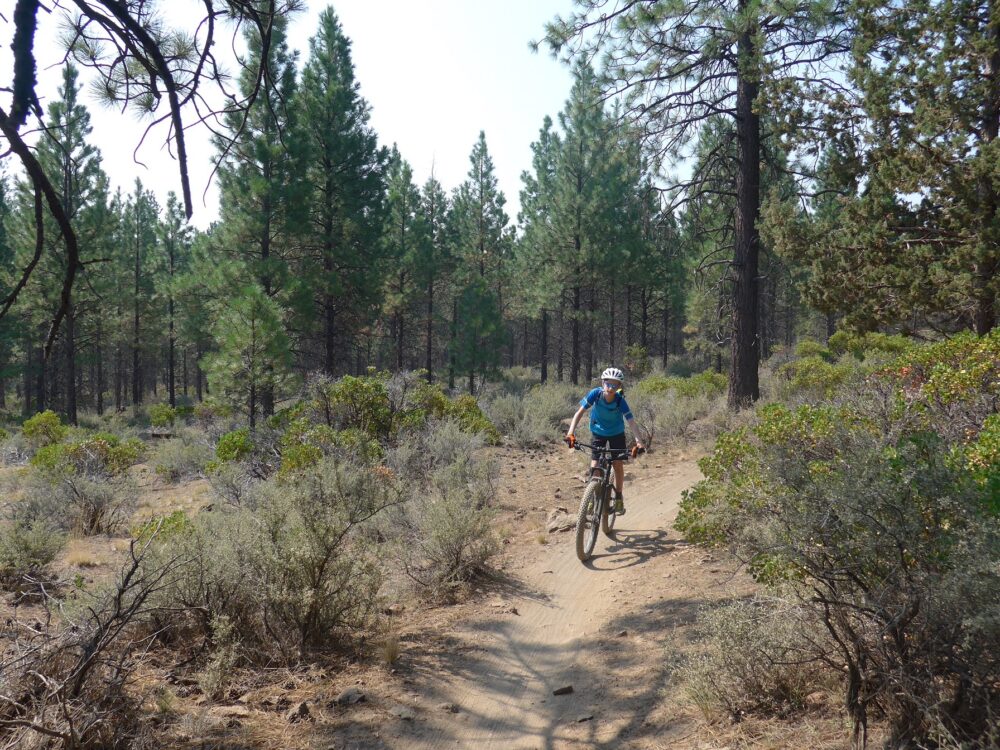 The next day the kind folk at Pine Mountain Sports gave us a lift up much higher, to Tumalo Falls and we rode all the way back into town, via Lower Whoops. My writing isn’t good enough to capture the sheer exhilaration of this stretch of single track – it was quite possibly the most fun mile I’ve ridden. There was no time to stop and take photos! 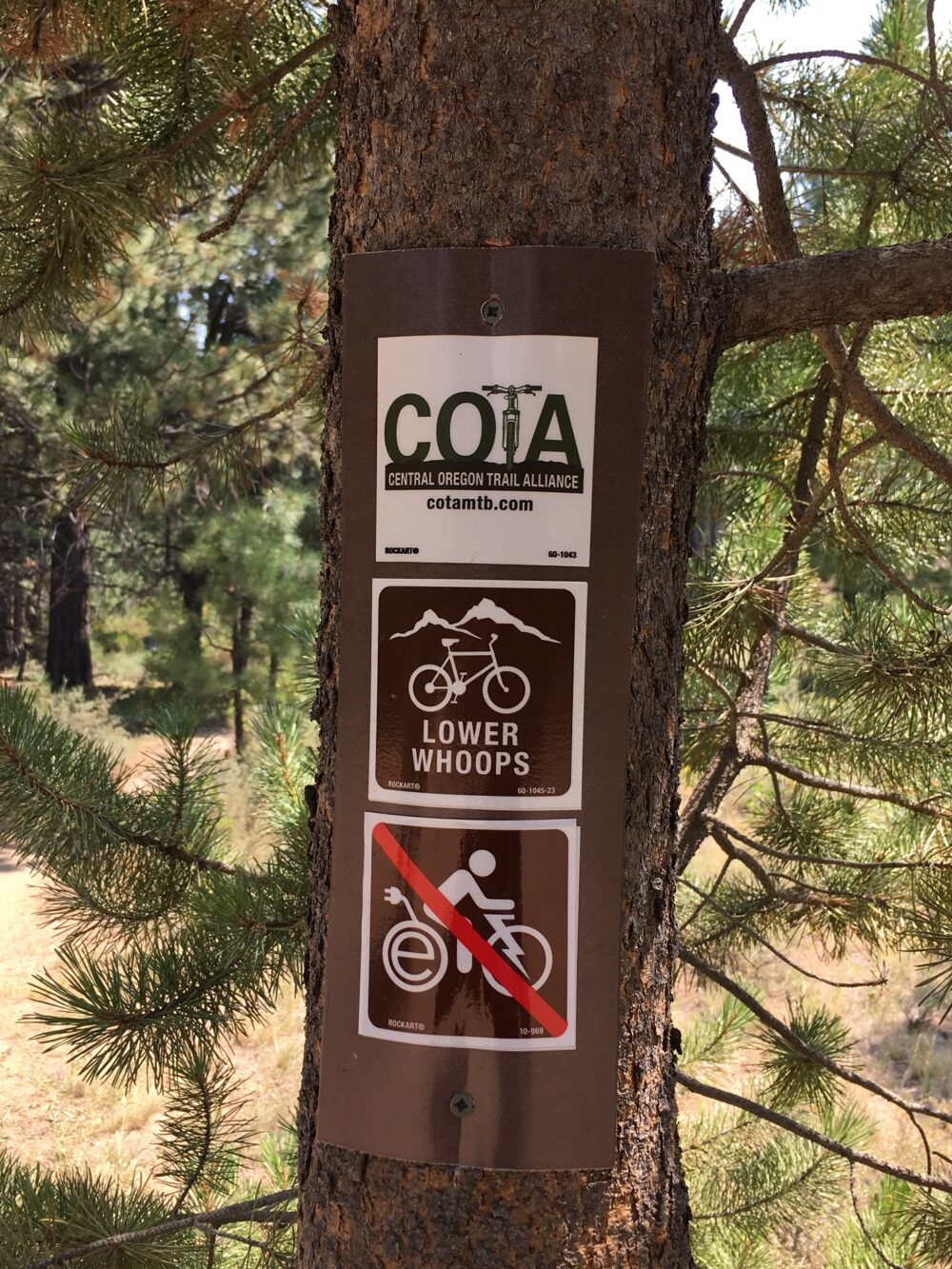 We all got to the bottom of the loop and didn’t even have to debate whether we added an additional climb into our day to do it all over again. Once back at Pine Mountain Sports I even bought the t-shirt!!

We’d done two full-on days of riding in the heat – far more than we’d planned, but it was impossible to be out on the trails and not keep on riding. The 27.5” wheel bike meant T could go so much faster and further than previously. I had to email the other bike shops on our trip to see if we can upgrade his wheel size.

One downside to our visit to Bend was that it was the height of the fire season so we didn’t get to see the amazing views – we knew there were big mountains looming over us, but just couldn’t see them.  This may look like a brilliant blue sky, but there was a haze everywhere which really limited visibility – occasionally we could just see the outlines of huge peaks. 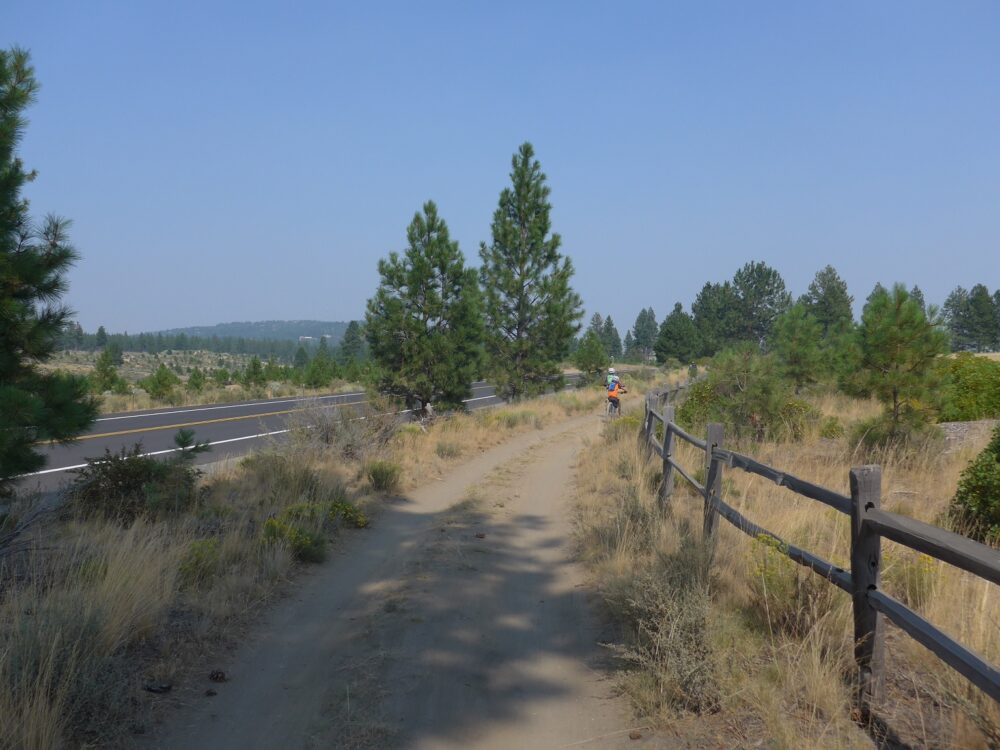 As there hadn’t been any rain for several months the trails were all very dry and dusty. Several people confirmed that they’re at their absolute best after a bit of rain – I think if we’d visited under those conditions we’d have had to stay!

Everyone was really friendly, both out on the trail and in shops and restaurants. Without exception every person we met loved living there, and was keen to give us advice on where to ride and what to do. The motto of the town is “You’re in Bend, Be Nice” and this really seems to be the case.

So, it was with really heavy heart that we had to pack up our kit and leave Bend. It’s definitely somewhere we’d love to return to. We only just scraped the surface of the trail network so there is so much more to explore. Plus we’d happily ride the Whoops loop over and over and over and over again……

And thus, it’s back onto the road, next stop Ketchum and Sun Valley, where we’re booked in for another 2 days of mountain biking. As I’m writing this we’ve been driving for over six hours and have just seen the first sign to Sun Valley. 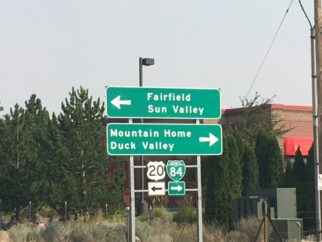 Plus I’ve just received an email to say they’ve had rain so the trails are in the perfect condition for riding……. The joys of a road trip!

Keep following Cycle Sprog on Facebook to find out how we get on riding the Sun Valley trails.


Disclosure: Some of the links in this article contain affiliate links, which may provide us with a small commission if you purchase through them. This doesn’t affect what you pay, but helps us keep the website running. 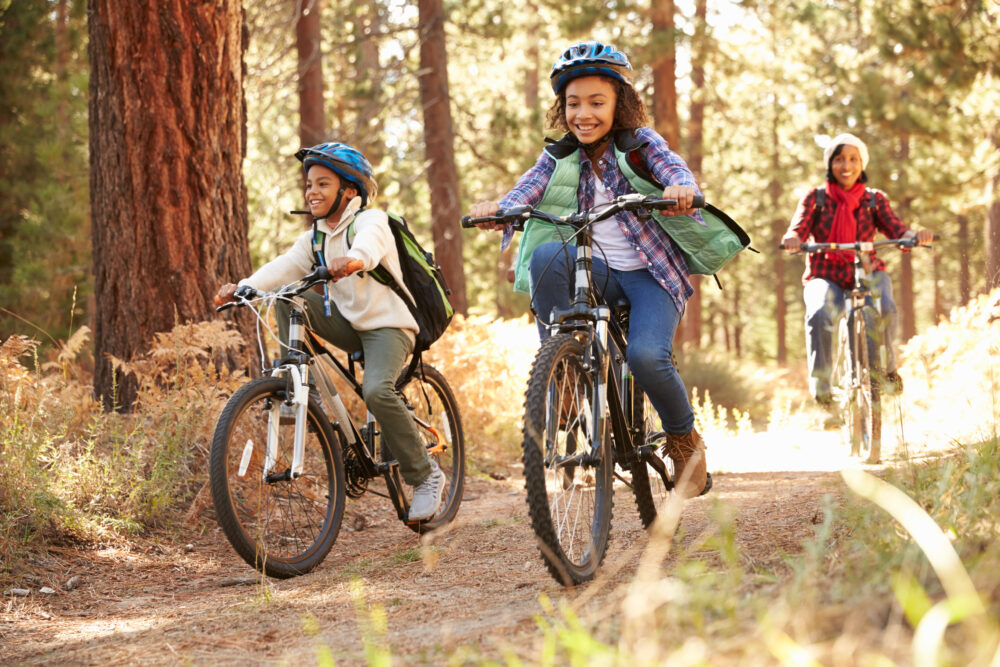 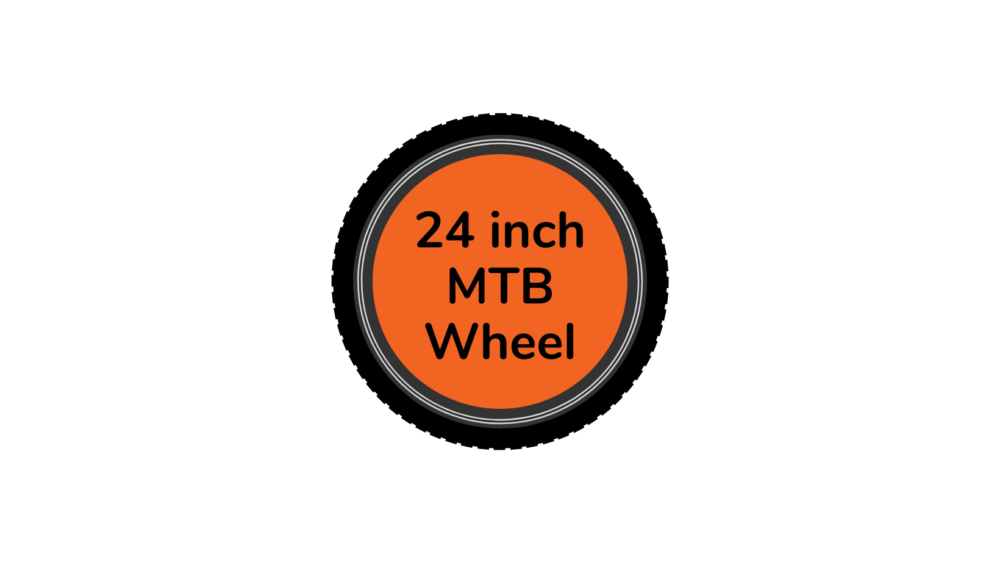 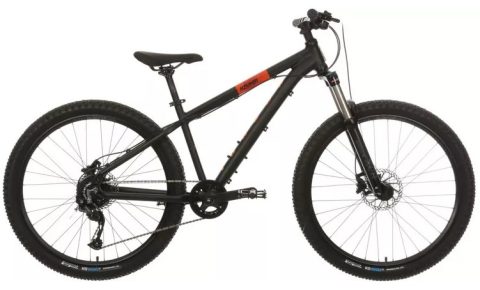