Family cycling in the Alps – Les Alberts to Briançon

During the May Half Term we were lucky enough to go on a family cycling holiday to the French Alps. We stayed in a tiny village called Les Alberts, which is nestled at the foot of the Vallee de Claree, 10 minutes drive from the resort of Montgenevre and the Italian border. It’s in the Hautes-Alpes department in the Provence-Alpes-Côte d’Azur region.

Our first ride out was from our chalet in Les Alberts to the historic city of Briançon, which is 5.5 km down the Durance Valley from Les Alberts.  Our guide, Florian (aka Flo) had pre-arranged our mountain bike hire, and the bikes had been delivered to our accommodation (Maison-Amalka in Les Alberts), so we were able to get out and ride as soon as we arrived mid-afternoon.

We (me – Karen,  husband Chris, 11 year old N and 8 year old T) started our ride on very quiet country roads, but quickly turned off onto traffic free paths that follow the route of the River Durance along the valley towards Briançon. Initially the going was easy, with the paths wide and undulating, dipping in and out of the trees. 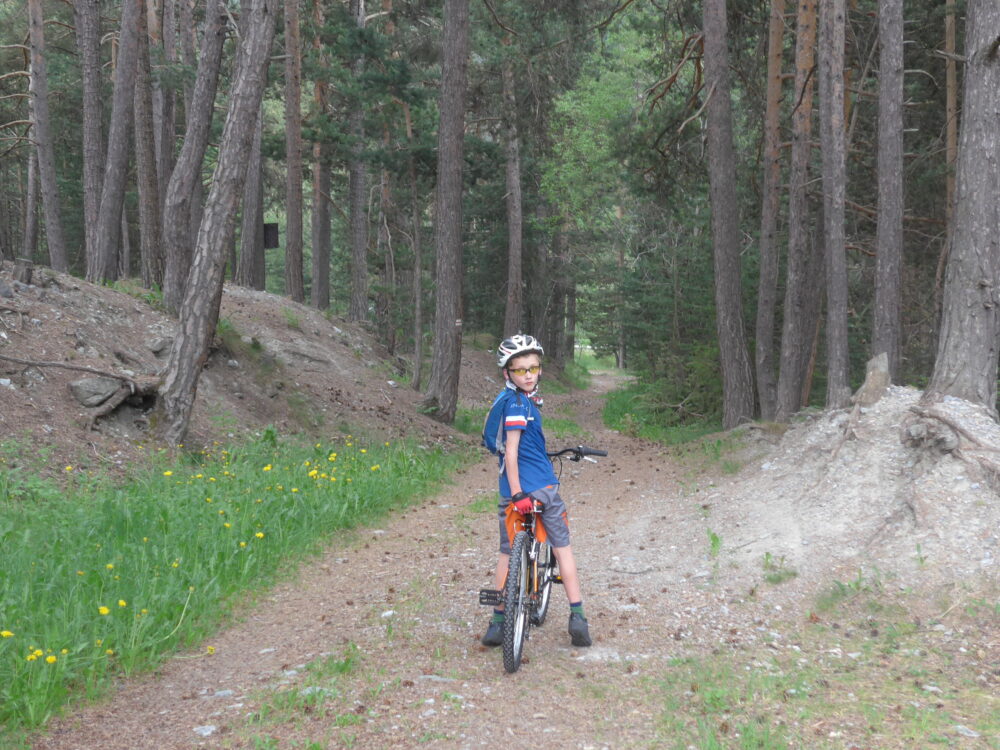 Almost immediately we saw our first way marker, the first of many we’d see over the coming days. 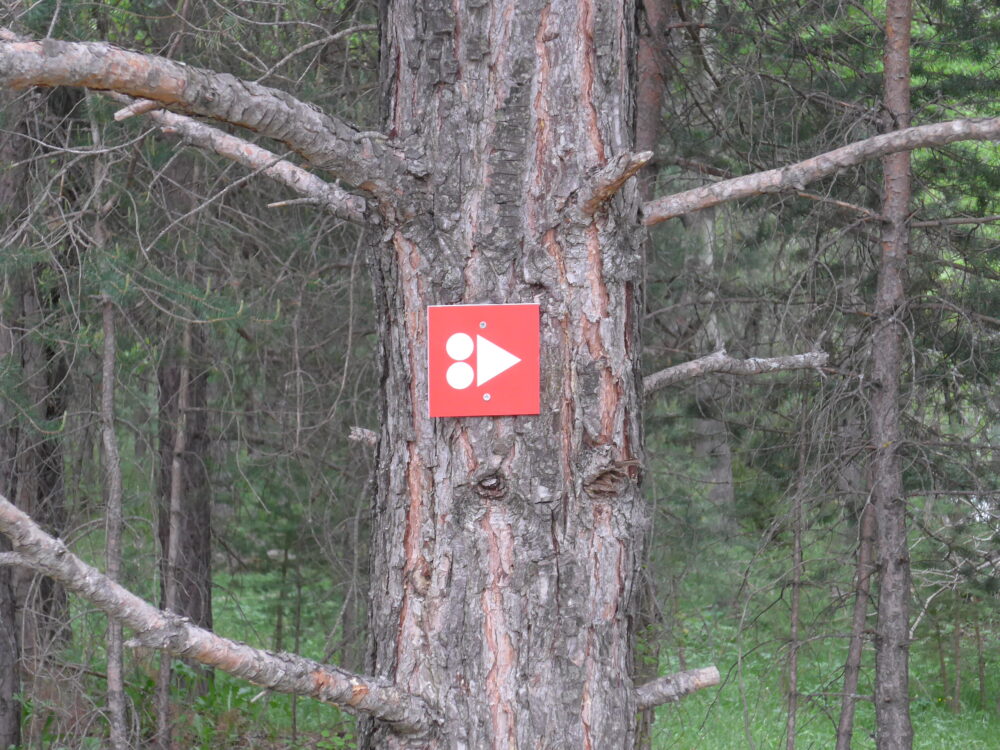 Flo explained that virtually every track in the southern alps can be cycled on, but some are more suited to cycling than others. The waymarkers show designated routes – the red ones are parts of long distance trails that can take days or weeks to complete, whilst the yellow ones are shorter, circular routes designed to be ridden in a day.

We hadn’t been cycling long when we came across the first evidence of the turbulent history of this region.  With the Italian border only a few miles away, the landscape is littered with reminders of conflicts going back centuries.  Our first encounter was this WW2 bunker and the sobering thought that is wasn’t that long ago that the entire area was on the front line of this horrendous conflict. 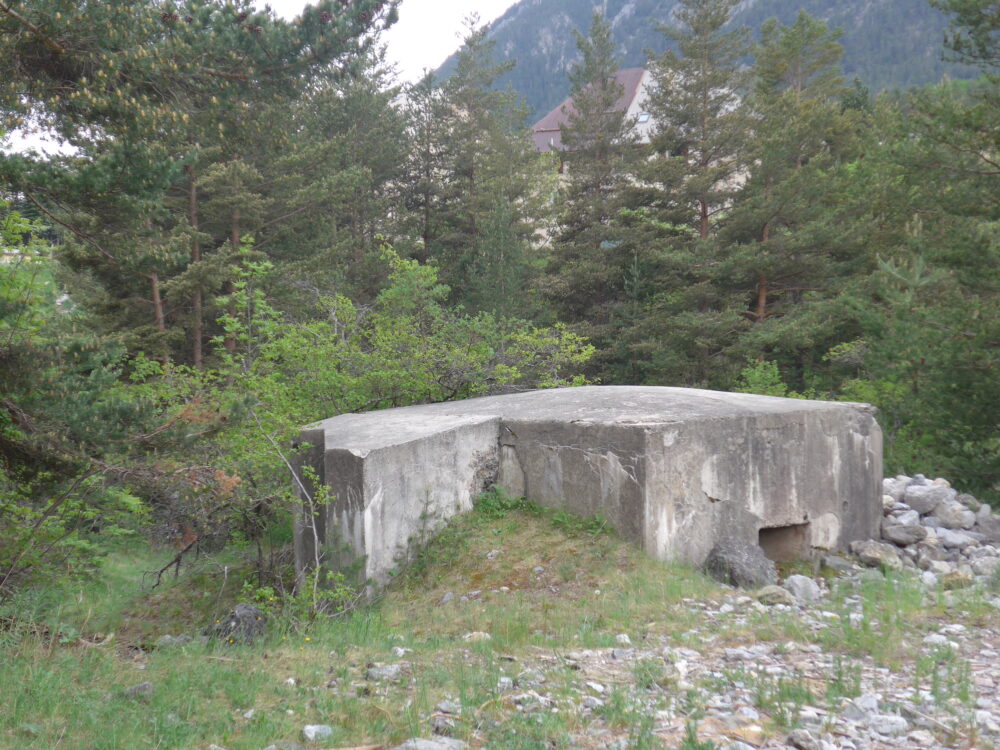 After about quarter of an hour of cycling the path started to narrow and ascent, as we entered the wooded slopes of the valley.  Far below in the valley we could still hear the River Durance, but it was now out of sight.  Soon we were riding single track through the forest, which really got us getting used to the handling of our rental bikes. 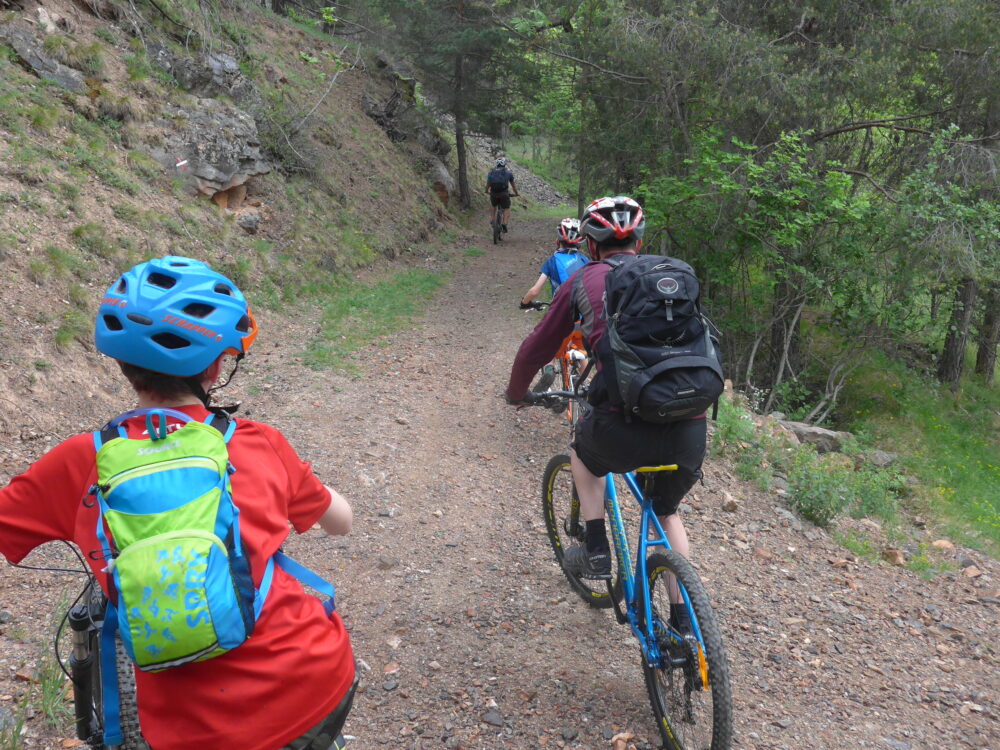 Not only did we all have to get used to riding a different bike, but the brakes are the other way round to how we have them set up in the UK, so the rear brake is on the right and the front brake on the left.  Thankfully it was me who was the only person in our group to pull the wrong one and end up being catapulted into a tree – thankfully during a slow manoeuvre so no lasting damage done, apart from a big bruise!

One of the joys of having a local guide with you is you find out things you’d otherwise miss, like this large stone at the side of the trail. 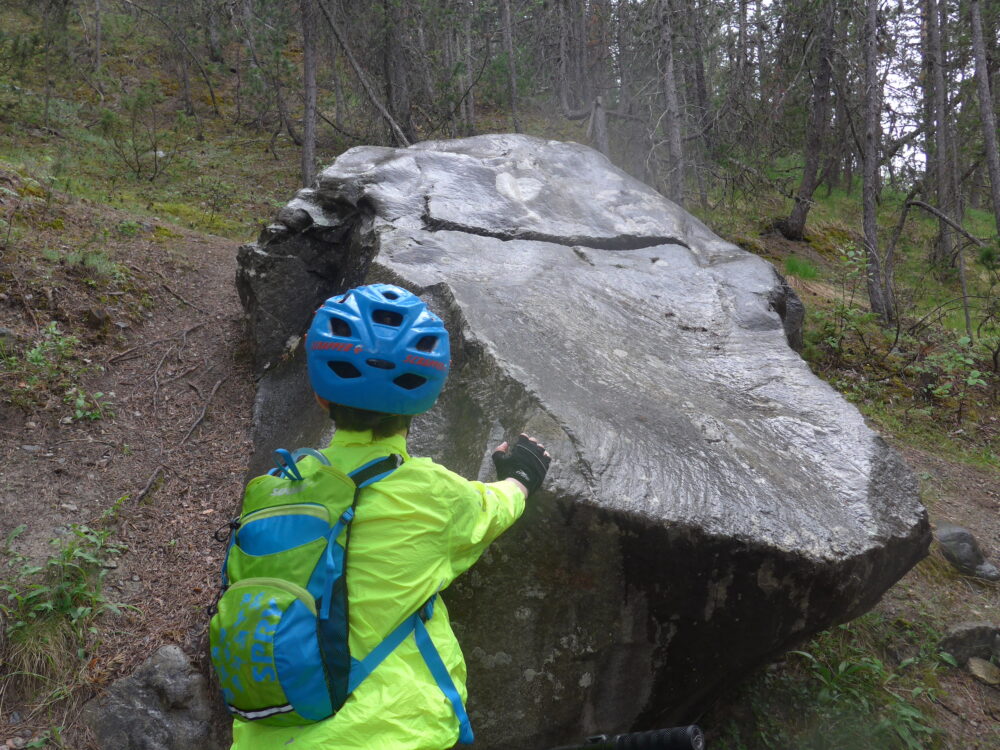 Local legend has it that the stone was used for sacrificial purposes over 2,000 years go, with the gory business going on at the top of the stone, with channels in the stone allowing the blood to flow down and be collected lower down.  For some reason, the boys found this fascinating – lovely!

As we continue our route along the side of the valley the weather started to close in on us, and as we approached Briançon the rain started to fall. As this was the southern Alps in early June it was somewhat warmer than we’re used to in Cumbria, although it was a pity it did obscure some of the views. I can only imagine how stunning it would be on a clear day. 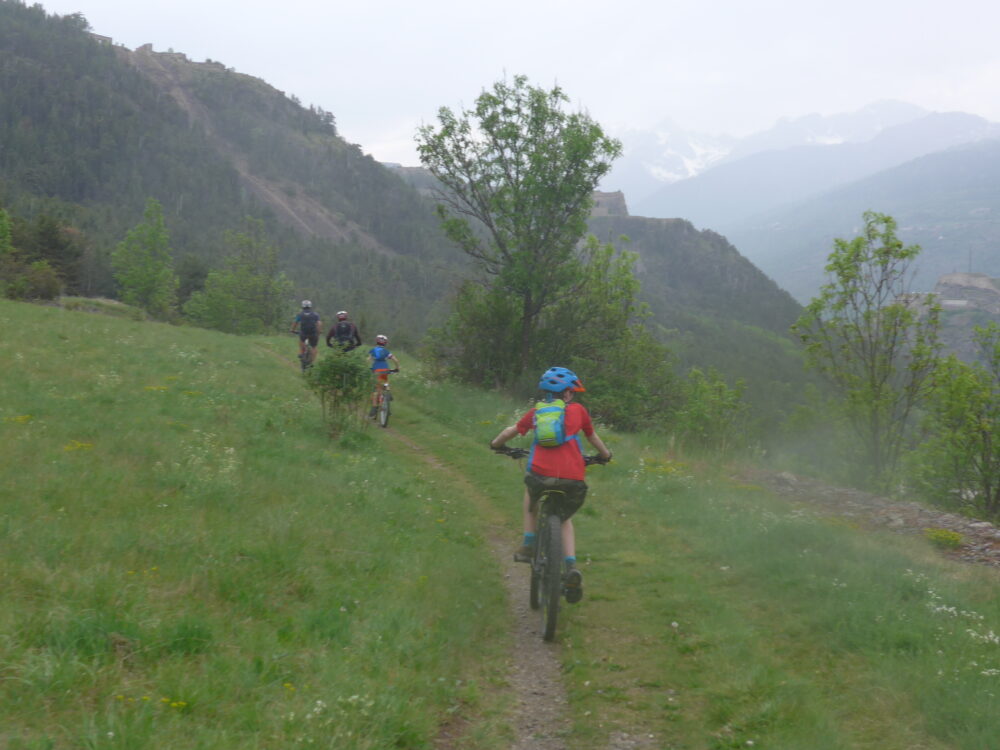 As we approached Briançon we discovered why it has been listed as a UNESCO World Heritage Site. The military fortifications high up surrounding the city are part of the Fortifications of Vauban which are 12 groups of fortified buildings and sites along the French border.

The forts at Briançon were designed by the renowned military engineer Vauban (1633–1707). They no longer serve a military purpose, and if you visit in a few years they may well be a luxury hotel and shopping complex. 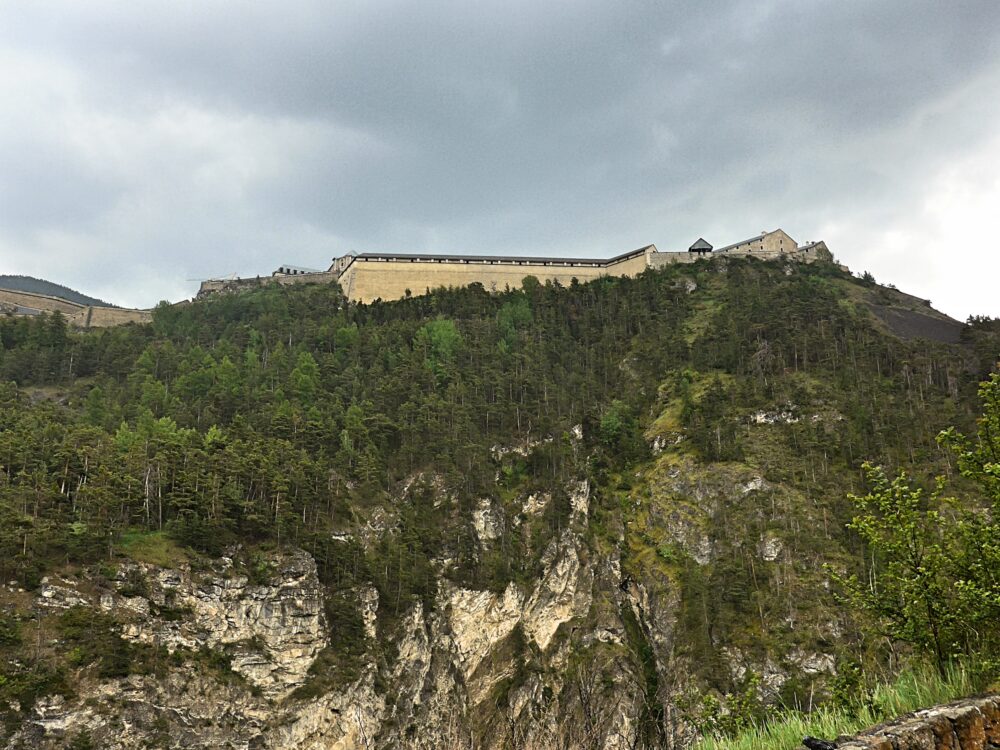 We crossed the narrow bridge from the southern side of the valley passing over the River Durance far below, and cycled into the city of Briancon itself. 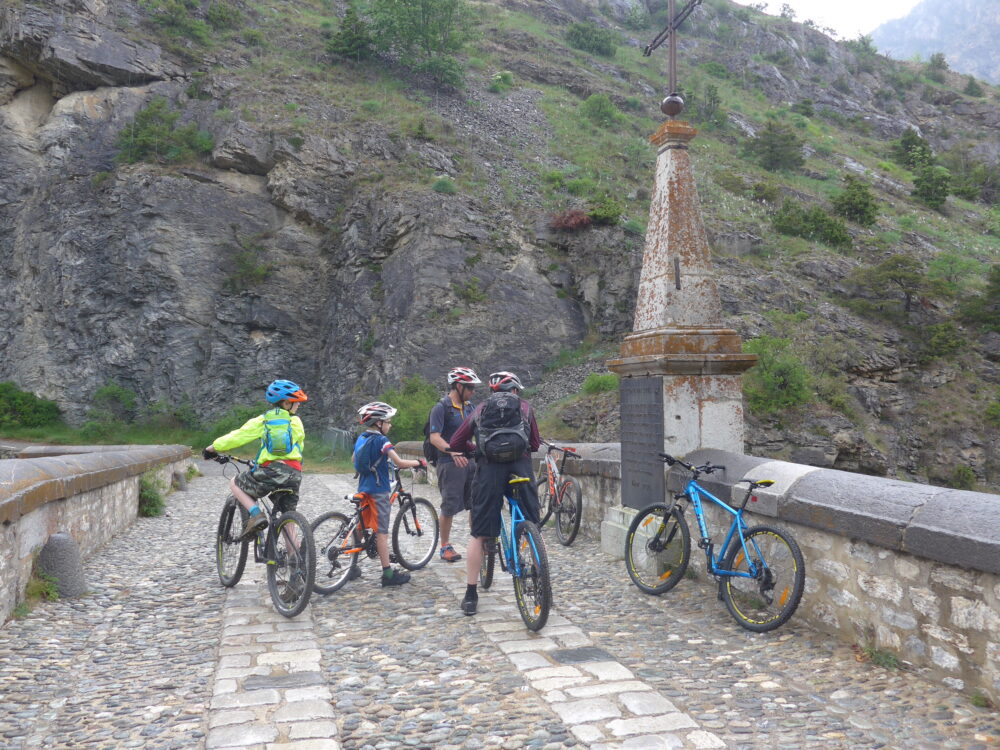 There was one very steep rocky climb up to the entrance through the city walls which was rather slippery due to the wet weather, so we had to get off and push. 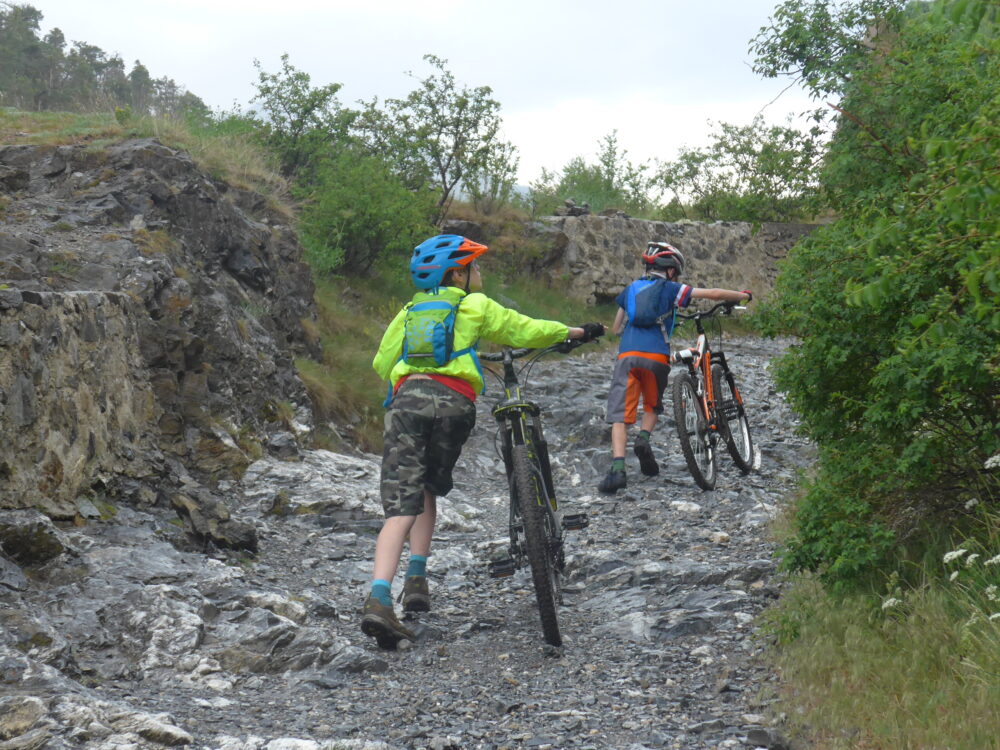 Once we were inside the city walls our off road part of the day had ended, but being back on the roads meant we were able to quickly move around the city.   Florian asked if we’d like to cycle up to the city fortification, which thankfully we all had the energy to do, as it afforded us great views over the roof tops. 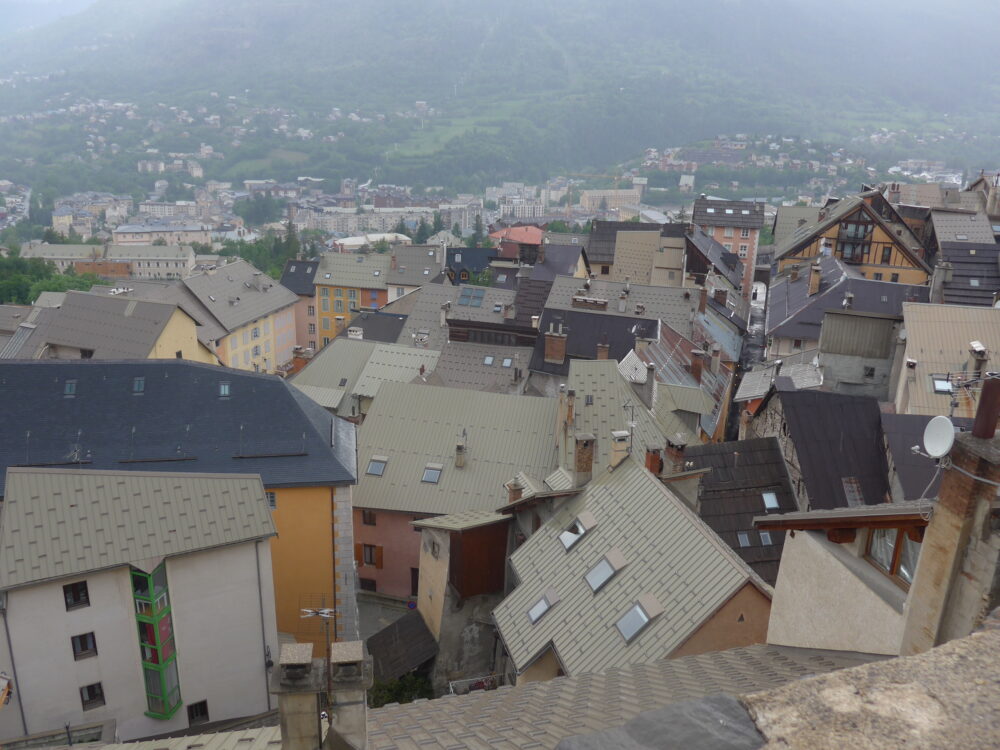 We were speculating which route Danny McGaskill would take across the roofs, when Florian told us that during July an Urban Downhill event takes place, which sees world class riders racing down the fortifications and attempting daring jumps throughout the crowd lined streets.

Briancon is well known as a focal point for road cycling, as the Tour de France has had 22 stage starts and 22 stage finishes in the city since 1947. 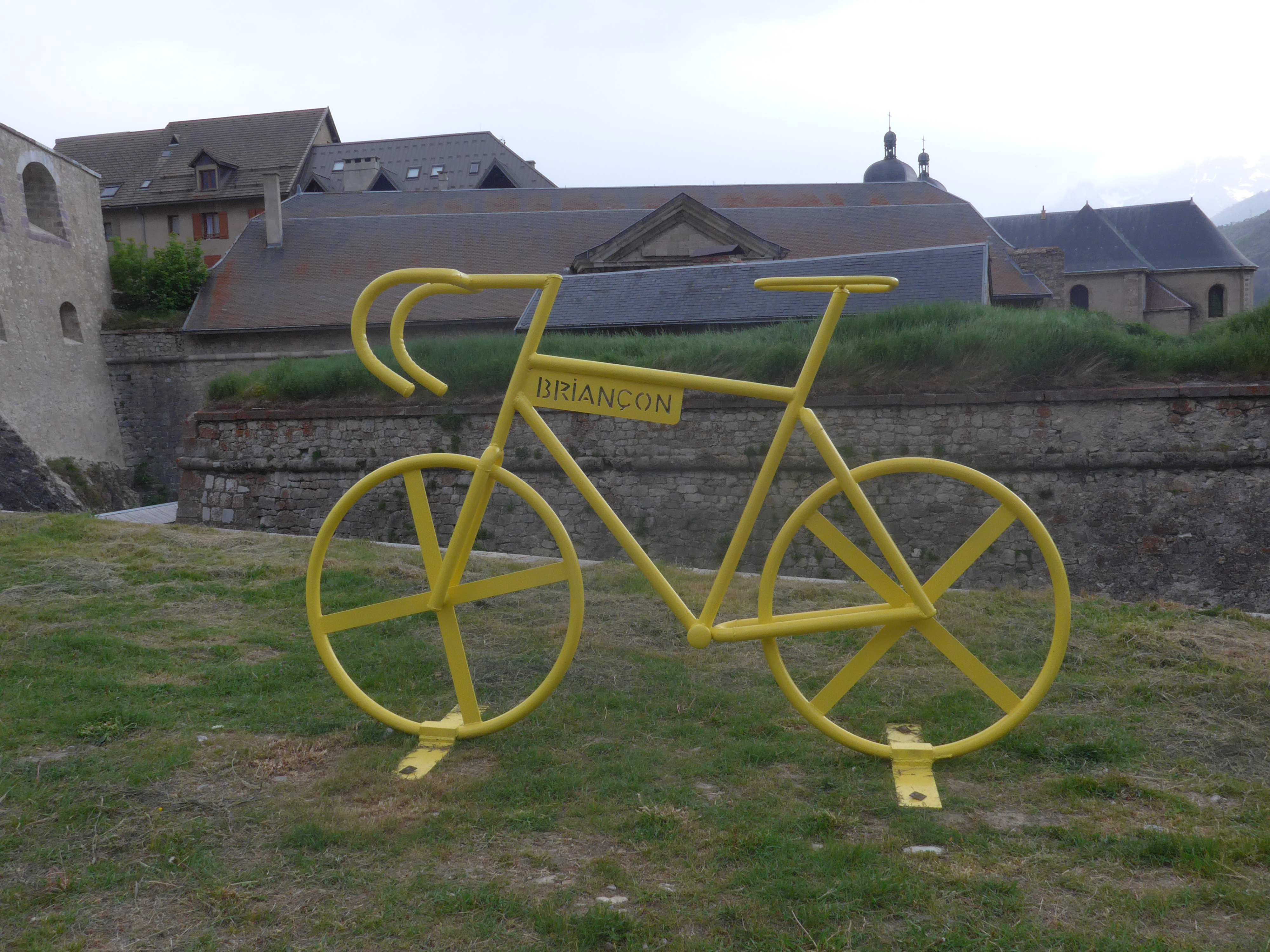 We were glad of our off road tyres however, as we cycled through the stunning old city, with its narrow, cobbled streets, which were fast becoming very wet. 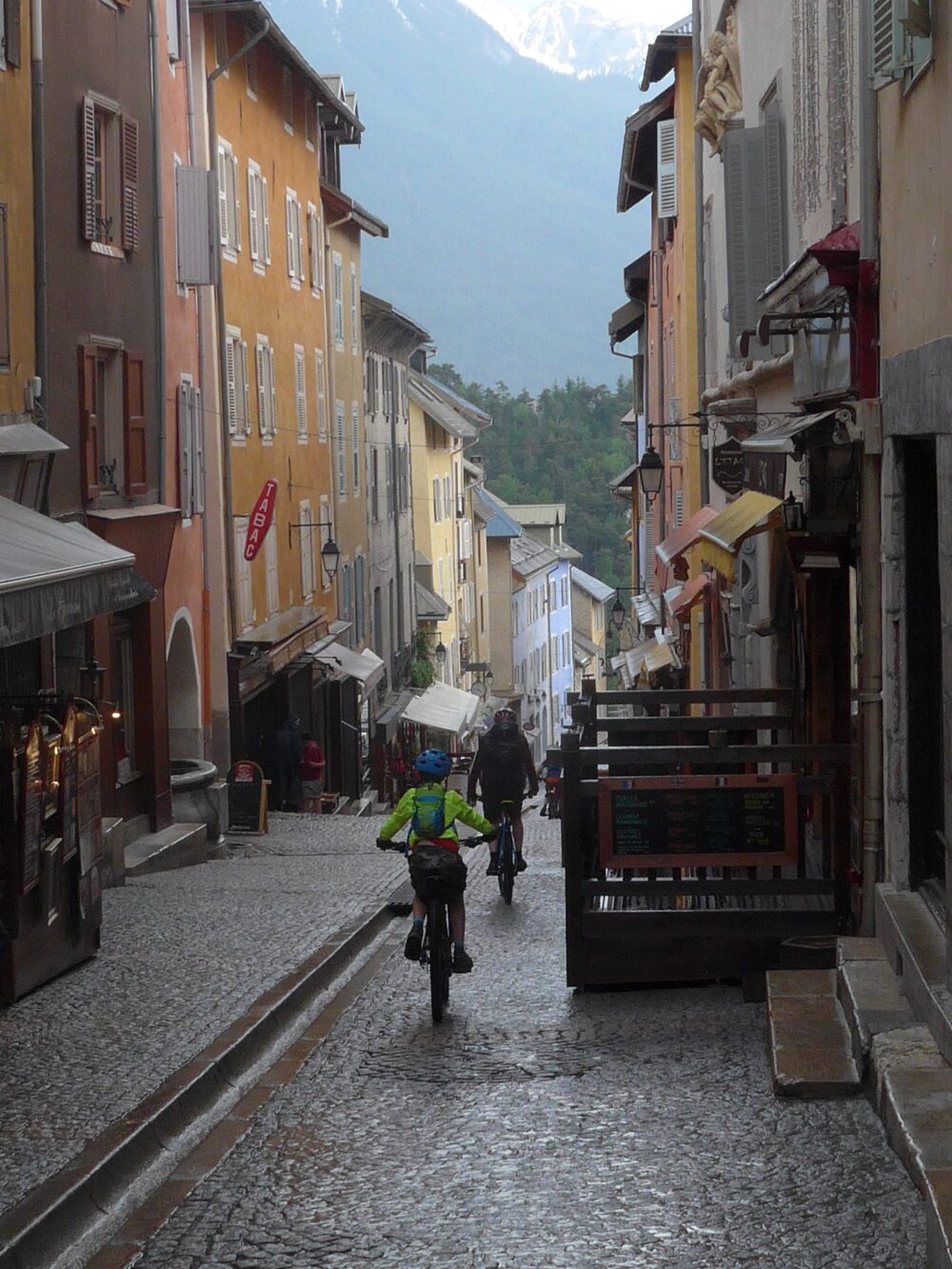 I would love to have had more time to stop and explore the old city – the quaint shops and cosy looking restaurants plus the various fortifications could easily take up an entire day.

However, we were getting increasingly wet, so Florian guided us through the back streets of the city to the bike rental shop – Go  Sport.  This was a paradise for outdoor types – from the outside we thought it was a bike shop, but it extends back and sideways into a camping and outdoor clothing shop – another place we could have whiled away a significant amount of time. 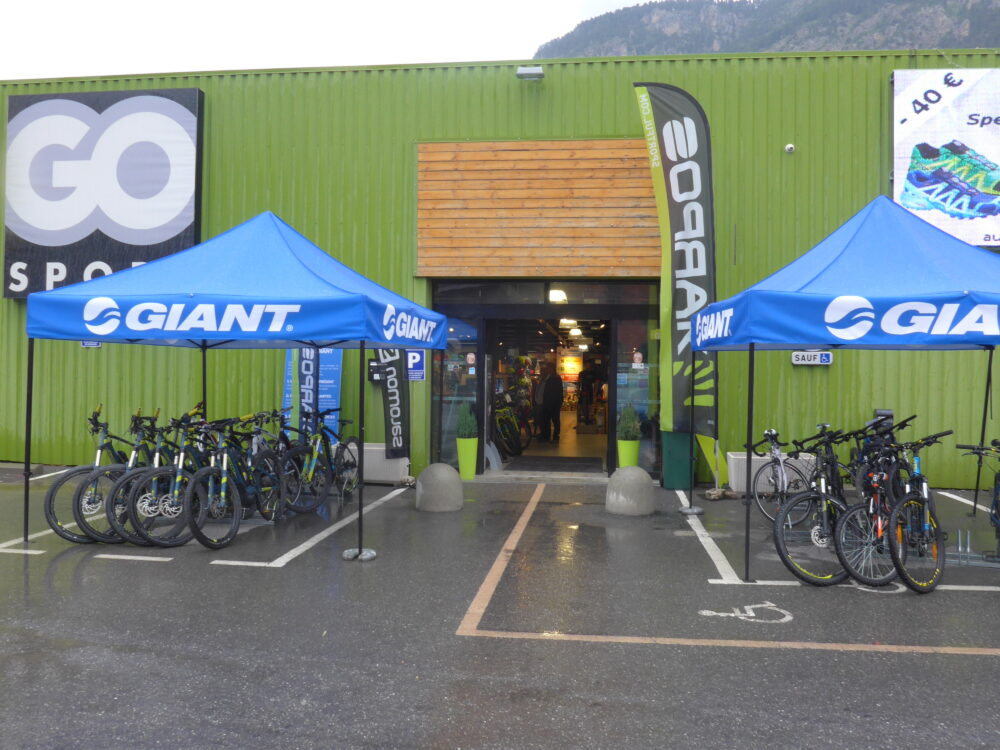 At this point, I was planning on refuelling the boys and then having to brace ourselves for a miserable ride back in torrential rain, when Florian announced that he knew a huge thunderstorm was due and had his car parked outside.  He’d already pre-arranged with Gilles, the shop owner to transport our bikes back to Maison Amalka later that evening. What an absolute star!!!

As we drove back to Les Alberts, the heavens really opened and the thunder and lightning started – and we were all really grateful for Florian’s local knowledge and organisational skills.  It was with great anticipation we looked forward to the next days family bike ride out along the Vallee de Claree, which I hope you enjoy reading all about.

Disclaimer:  We were invited to stay at Maison Amalka during the Whitsun half term and received Florian’s services as a bike guide free of charge.