Today I went on a very special family bike ride

Today something very special happened. It was a lovely sunny day, and we set off as usual on a family bike ride. As he has done so many times before, Chris was pulling 4 year old T behind him, this time using the FollowMe Tandem cycle hitch, whilst T sat resplendent on his little blue Islabike Cnoc 16, grinning broadly at everyone he passed.

As they zoomed off towards our local Sustrans cycle path I followed at a more sedate pace with 7 year old N, who was again riding the Frog 55 he’s been sent to review.

To complete the picture for you,  I was riding the Carlton that Chris has lovingly restored since being given it several months ago.

We have recently started to let N ride on quiet roads at the weekend, but it’s still a bit stop/start, as we have to negotiate a couple of junctions to get to the totally off road cycle path that is perfect for family bike rides.  Finally we caught Chris and T up at the start of our “proper” ride.

My little boy has learnt to ride his bike!!!

Chris had unhitched the Islabike from the FollowMe, and T was sitting proudly astride his bike, raring to go.  He learnt to ride just over 10 days ago and has been practising with Chris.  Sadly I missed the big day when my little boy rode his bike for the very first time as I was working away (it’s a strange phenomena of 21st Century life that I can read about it in a blog!). Since then we’ve been on holiday for a week (more details to follow – but suffice to say our plans to cycle didn’t materialise).

So, this was his first opportunity to show of his newly acquired skill to Mummy and big brother – and how well he did it.  He rode steadily and (almost) straight, along the route of the old railway line, with a look of determined concentration on his face. His goal was the signpost that marks the border between England and Wales – being a fiercely proud Welshman it was the perfect target to set him. 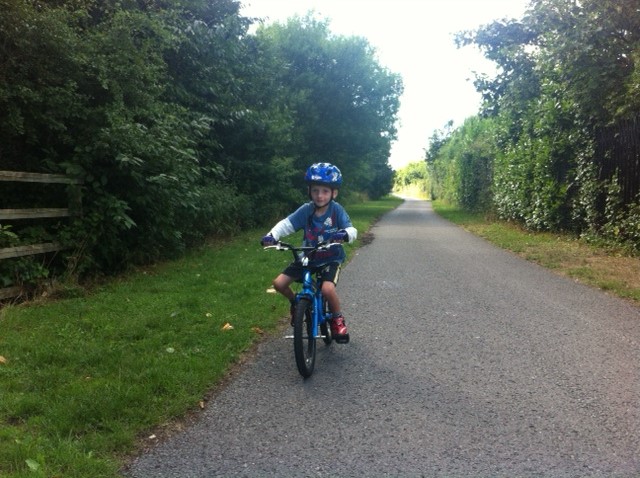 When he arrived at the Welsh border I can’t quite believe he didn’t explode with joy.  He was so proud of his achievement of having cycled to another country. In his own typical style, he took to the winner’s podium to celebrate, declaring himself the new holder of the yellow jersey. 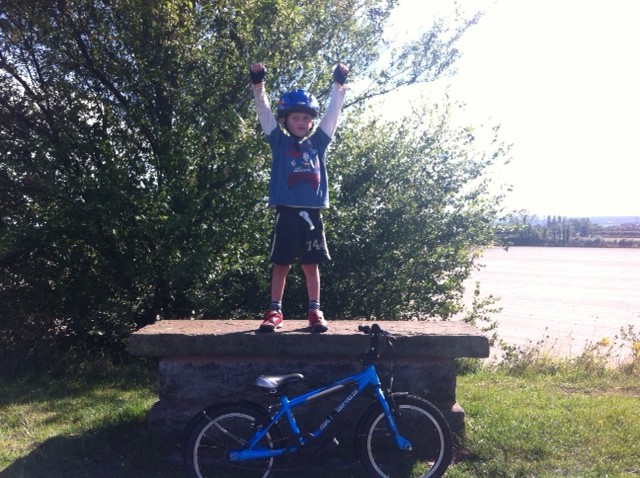 He then surprised us all by managing the full ride back to the road, by which point he was also the self declared King of the Mountains, due to the return leg having a slight upward gradient at the end!

So many family bike rides ahead of us

As I rode at the back of our little party, it was a wonderful feeling watching my three boys (aged 40 something, 7 and 4) all riding ahead of me.

It’s wonderful to think of all the adventures ahead of us. I’m so looking forward to taking them mountain biking to some of our old favourite haunts.  I’d love for us to do some cycling holidays, like other Cycle Sprog contributors such as Kathryn and Liz already do with their families.  I’m excited about going out for training rides with them when they’re older, and know there will be a time when I struggle to keep up with them!

So I rode along behind them, with a fierce pride and the expectation of a future of exploration and adventure on two wheels. 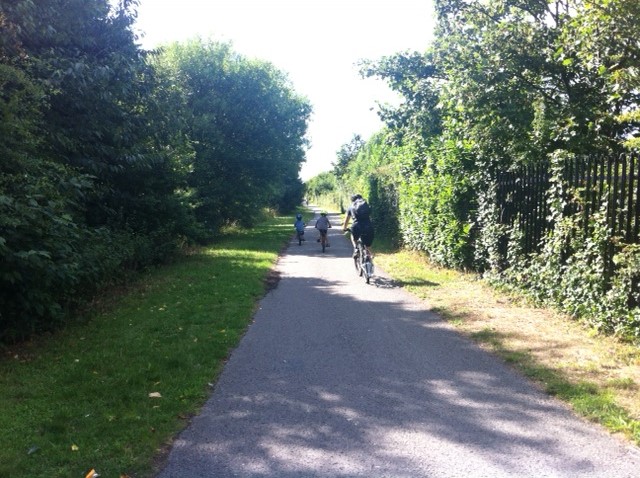 But the ride was also tinged with sadness – as inevitably today marks the end of an era.  For about 6 and a half years now either Chris or I have been needed by one or both, of our boys for them to be able to join in our bike rides.  Nothing much will change with T on our daily commutes – he’ll still need to be carried on the front seat, or pulled on the tagalong up the hill each morning. But, when we head out on our family rides at the weekend, both Chris and I will be riding solo.

Over the years we’ve had to adapt to keep on cycling with the two boys.  Over a period of about 6 and a half years we’ve had two different bike seats that fit the back of our bikes (the Co-pilot Limo and the Topeak Babysitter rear bike seats), a front mounted bike seat (the Oxford Leco), 2 different two seater bike trailers, a Trek Mountain Train tagalong, a FollowMe tandem and a trailgator.  Plus we’ve had a balance bike and a stabiliser bike to help them learn to ride.

So much of this equipment is now redundant. The balance bike will never be needed again, T’s already outgrown the rear seats, and the FollowMe and trailgator probably have a bit of life left in them, as his little legs won’t be able to go the full distance on all our rides just yet. 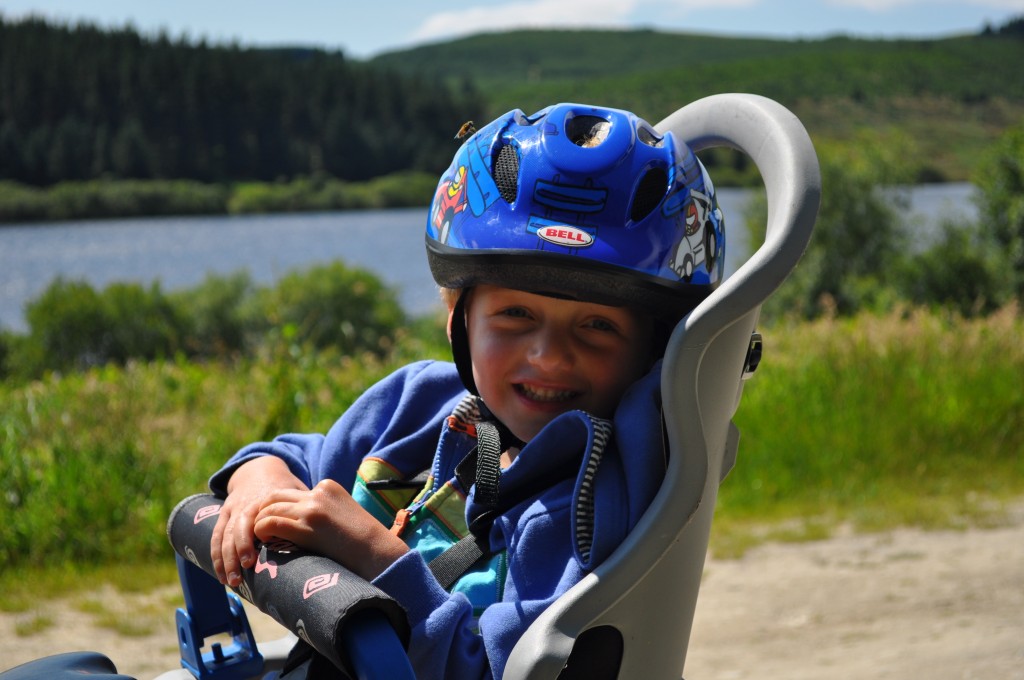 But as I rode along, I mourned yet another example of the passing of that age my children are dependent on me.  T is starting school in September, and as he rode away from me today along that cycle path, it was just one more of those little moments where you realise you’re role as Mummy is constantly evolving.  Today has been added to the growing list of memorable milestones such as weaning onto solids, the last nappy, the final breast feed, the first day at nursery, starting preschool, the first day at school, the first sleep over at a friends house.  If my role as a parent is to guide my children along the path to adulthood in the best way I possibly can, I hope my two boys will grow up thinking cycling is a normal way to get around, and will have many happy and safe years in the saddle, whether for recreation, sport or transport.

And, hopefully the legacy of these years will be of some use to other parents facing the same questions we have done.  It was trying to work out what the different combinations we needed to keep on riding our bikes with our young children that made Chris and I realise that there was nowhere that really dealt with these trails and tribulations.  This lead us to set up Cycle Sprog just over a year ago, as a place parents could come to learn from our experiences of riding with our young family.

So what next? I don’t know what the future holds, either for us as a family or for Cycle Sprog, but I guess we ought to work out pretty quickly how we can fit a fourth bike on our car roof rack! I’ll let you know how we get on……