Are Cumbria County Council REALLY doing this to our cycle paths?

Home » blog » Are Cumbria County Council REALLY doing this to our cycle paths?

This is a summary of my observations on the Kendal Cycling and Walking Follow-up consultation.

It sounds a bit boring I know, but please bear with me, as it actually affects how we are all able to move (or not) around our lovely town.

Especially when so many of us are starting to think about the environment, and how we can make easy changes to reduce our carbon footprint.  Plus there’s the ever increasing financial costs of filling up a car just to make short journeys.

I was invited to sit on the LCWIP Project Working Group as a cycling representative (although I also take a keen interest in the walking proposals as I tend to walk more than I cycle in the centre of Kendal).

What is an LCWIP and why is it important?

An LCWIP is a document / plan which sets out the ambitions for cycling and walking in an area.

Before you get excited – a word of caution.

Just because an area has an LCWIP doesn’t mean any of it will get delivered.

But it’s important for two reasons:

Note – bidding for money doesn’t mean you’ll actually get it.

I have attended, as an unpaid volunteer, every LCWIP Project Working Group meeting I’ve been invited to, and at each meeting I have raised the same points – over and over again.

I have reviewed all the documentation sent to me, including the draft of the Follow Up Consultation document, which I responded in detail to on 6th October 2021.

In none of the meetings or documents was there EVER a mention that improvements to existing, or building of new, cycling infrastructure in Kendal were to be made dependent on the building of a new road (the Kendal Northern Access Road – KNAR).

I was therefore really surprised to see the final version of this document had significant changes made to it that made the provision of cycle infrastructure through the centre of town “dependent on the KNAR being delivered” (page 9) – and a dotted red line rather than the previous solid red line.

It is also disappointing to note that: 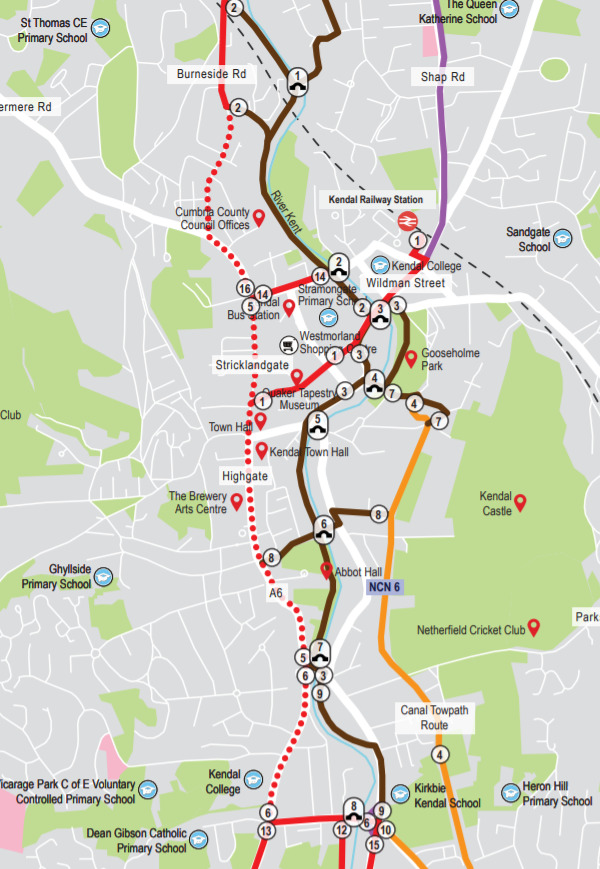 I also noted that a key route north via Anne Street joining the canal path to Shap Road has been removed.

This is between points 3 and 1 on the map in a semi circle.  This is because Wildman Street – the red line – is southbound only.

This happened between two meetings and I didn’t pick this detail up at the time – apologies.

What is the KNAR and why is it affecting cycle paths in Kendal?

The Kendal Northern Access Road is a proposed route that will take traffic around Kendal – particularly to the industrial estates – rather than through town.

The debate about the need for a KNAR has been raging for decades and various plans produced.

Cumbria County Council have just received funding to do the next set of detailed planning for this. It will take years before the road is built, even if it gets approved.

The KNAR is contentious and I don’t particularly want to open that debate now.

What really annoys me is the way this was sneaked into the document at the last minute after the Project Working Group had reviewed the draft, and how it was NEVER mentioned at ANY of the numerous meetings I’ve been spending my time attending.

There was no chance to ask questions such as:

Thankfully I have been able to have a meeting with two very helpful people at Cumbria County Council today, who have kindly explained everything to me.

This is what I learnt today:

Are Cumbria County Council (of the coal mine fame) really making active travel dependent on road building given we’re in a climate emergency?

Yes – they do not believe “modal shift” – getting people to change how they travel – can be achieved with the current road network. Therefore they want to concentrate all efforts on the north-south river/canal corridor for cycling, and will not tackle the town centre route until the KNAR is built.

I did point out that if you’re trying to get where you want to go by bike this is rather restrictive.  I don’t know about you, but I tend to want to go to places other than the river / canal route.

Where is the detailed variable modelling to show that the KNAR will reduce capacity on our roads during rush hour / school run time?

This hasn’t been done.

Even if it does reduce HGV’s coming through town, we need evidence it will actually reduce traffic at peak commuting times, when most journeys are short ones which wouldn’t be using the KNAR.

There are other solutions to this.

Can’t we be more creative in how deliveries are made – especially as internet shopping is increasing?

Or are we happy to have our town, including our residential streets choked with delivery vehicles trying to meet their quotas for the day?  (Note – these vehicles going into residential areas won’t be on the KNAR)

It’s ridiculous that every courier company delivers individually to the same address, sometimes several times a day for the same company.  It wasn’t all that long ago when there was just one parcel delivery a day – they brought all your parcels in one go.  Radical!

All solutions that don’t involve building a road, but do involve innovative thinking and passion for trying to make things better.

What is the budget for active travel in the KNAR?

I was told this hasn’t been considered yet – but you can see on page 47 of the snappily titled Kendal Inner Northern Orbital Access Route Strategic Outline Business Case that there is no budget for either cycling provision along the route  (there is however provision for “Footway – standard”), and more critical for this discussion,  no budget for improvements to the cycling infrastructure in the town centre

My understanding is that the budget for active travel improvements in the town centre was originally included but was removed by the Kendal Highways and Transport Study steering group. I am seeking clarification on this, so please don’t quote me on it.

What does this change mean for the existing substandard infrastructure already in place through the centre of town?

This is where things get, sadly, REALLY interesting for the LCWIP, and the people of Kendal trying to reduce their dependency on car usage.

I received confirmation that there will be no upgrades to the existing cycling infrastructure along Stricklandgate until the KNAR is built.

In my view this is very bad news for Kendal.  The existing contraflow route through what appears to be a pedestrian area is frustrating for cyclists, pedestrians and the few motorists who use this.

There is a lot that could be done to make this space much better for active travel – and encourage people to use it.

Any improvements to make cycling safe from Kendal College and along Highgate are also out of scope, as is the road from the old Evans Cycles junction through to Windermere Road.

BUT – we’ve just also learnt that there’s currently no budget for active travel in the KNAR – so it begs the question “Are we ever going to get improvements to make it more attractive to cycle into the centre of town?”

What happened to the north bound link from town to Shap Road?

There was confusion on today’s call as to why this was no longer in scope.

Could it be because a two way cycle path is being planned along Wildman Street (in our dreams)?

Or a technical error?

Or a realisation that dealing with Longpool roundabout is quite tricky and we’re being left to just find our own way through this mess?

Kendal’s LCWIP – does it deliver?

My curiosity piqued about CCC’s commitment to active travel, I decided to do some more digging (with a bit of help from some seasoned campaigners – thank you! )

Does the 20mph limit have to be out of scope of the LCWIP?

Why else would you not introduce a simple and cheap measure that delivers improvements in safety, congestion, air quality, active travel rates and community?

Especially when the Town Council is actively trying to get a 20 mph limit implemented and it’s being rolled out across many parts of the UK?

I’ve now looked at the government guidelines on LCWIPs and see that section 6.33 states “Improvements that can potentially be implemented to address existing deficiencies
may include the following…… reducing traffic speeds, e.g. by introducing 20mph limits/zones and providing traffic calming features.”

I’ve also been advised that having something like a 20 mph limit in your LCWIP, and then implementing that via existing highways budget (because it’s so cheap) could even help demonstrate to the Department for Transport that a town is serious about active travel, and therefore stand them in good stead for getting funding for other elements of their LCWIP.

Why is improving Shap Road out of scope for the LCWIP?

There appeared to be genuine surprise on today’s call when I said there were issues with Shap Road, despite me mentioning it at EVERY meeting.

I was told that if I had issues with the Shap Road cycle path to include them in my response to the consultation.  I do hope there’s not a word limit!

Is there any money to build new active travel schemes?

There is money out there – just not to spend on making Kendal a better place to move around without using a car.

There’s a total budget of £2bn for all English authorities to bid for active travel.  That is nowhere near enough to go around and a lot of places are not going to get funding.

However, by contrast Mott MacDonald have just been awarded a £434,611 contract to work on the next phase of documents for the KNAR.

That’s almost half a million pounds!  That could go towards actually delivering improvements on the ground, here in Kendal – NOW!

If you want to see how much cycle infrastructure costs I find this document quite useful.  The costs for what we need here in Kendal are very cheap compared to building a road!

These are just my observations on the Kendal Cycling and Walking Follow-up Consultation as your cycling representative on the Kendal LCWIP Project Working Group.

I hope they help you understand what’s going on, and encourage you to fill in the consultation document.

You may agree with my views, or totally disagree with them, but I think it’s important the community get a say in how we improve our public spaces – this is a chance to make our voices heard.

Here is the link to the online survey

Download the document first, and the cycling and walking maps.

I have attended all these meetings in my own time.  If you’d like to help support my continued involvement in campaigning for safer infrastructure you can support me through KoFi. 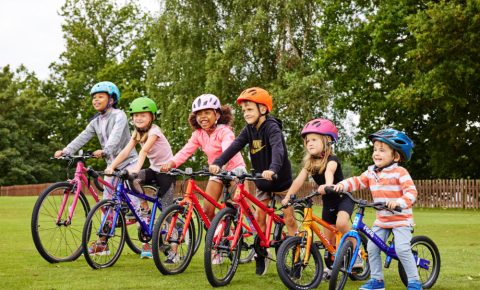 Leasing kids bikes is gaining in popularity . But how does it work, how much does it cost and is it suitable for your family? 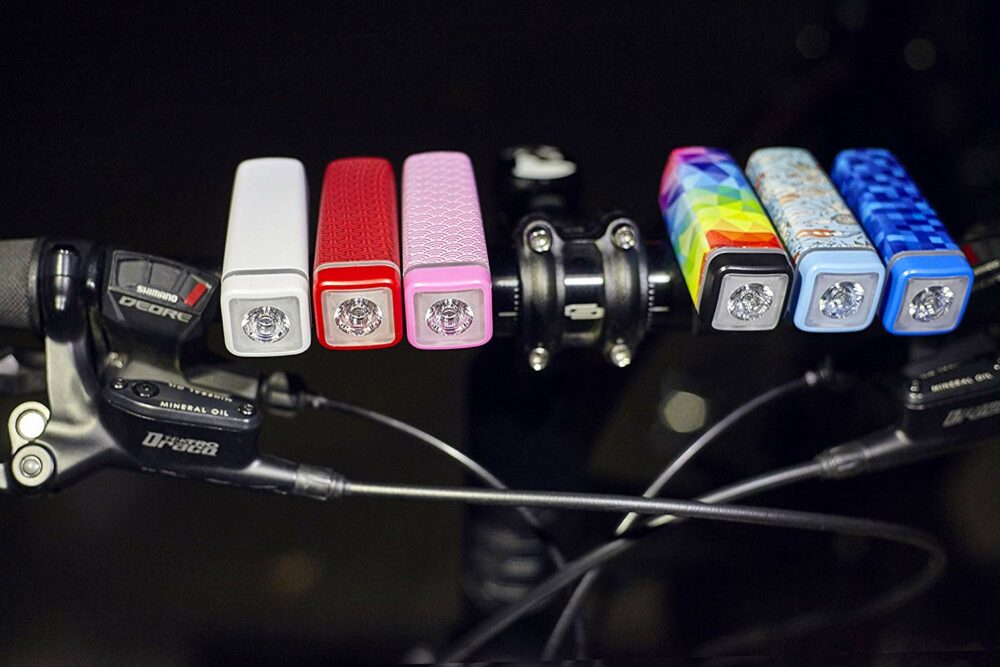 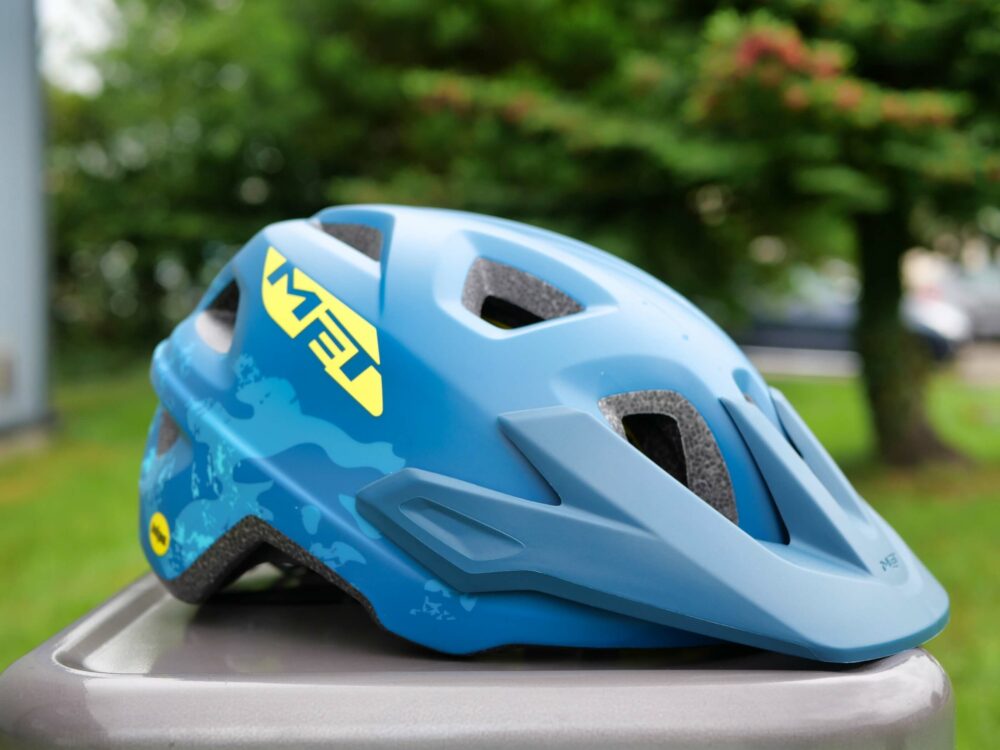 MET is a big name in cycle helmets, and in this review we are taking a look at their Eldar MIPS Youth helmet which is designed for children’s heads in the 52cm to 57cm range. With so many features, and a price tag to match, is the MET Eldar MIPS one of the best kids…