Our first family cycle ride of 2013 – pirates and punctures

Happy New Year everyone – here’s to a year full of family cycle rides!

Today is the 5th day of 2013, and the first chance I’ve had to get in the saddle this year.  After a very busy three days back at work after a relaxing festive break, I was desperate to get some fresh air and exercise, and to try to recapture that chilled out holiday feeling that’s fast slipping away.

Saturday is football day for our eldest son N, so Chris was on duty on the sidelines, leaving me at home with 4 year old T for a couple of hours.  I was very pleasantly surprised, when popping outside with the recycling, to find that rather than cold January weather the climate was almost spring like.  The perfect opportunity for a quick family cycle ride – albeit with only half the family. 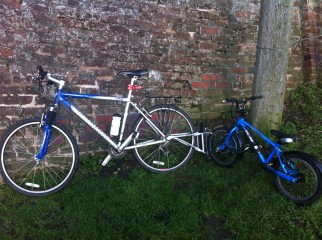 Those of you who are regular readers of the site, will know we often use a FollowMe tandem for our family cycle rides.  This cleverly connects T’s bike to an adult bike, as he’s  not quite at the cycling solo stage. It’s been a while since I’ve used it myself (Chris is the one who usually sets it up for our family cycle rides), so I had to go and dig out the instructions. About 15 minutes later I was feeling very smug with myself, as the bikes were ready to go.

As always it took another 20 minutes for T and I to get ready – wee stops, eating snacks, digging out sunglasses, putting gloves on, filling water bottles all takes up more time than you think. Finally we were ready to head out, and T was very excited. Firstly, because he’d put his shorts on over his thermal leggings, he thought he looked like a “real mountain biker”.  Then, when he donned the sunglasses he asked “Do I look like Bradley Wiggins?” What do you think?

We headed off on our favourite local family cycle ride route, along the local canal towpath.  Today, as the weather was so lovely we were able to venture further than we have done for a number of months, and ended up passing some moorings. One of the barges was sporting a Jolly Roger flag – T was beside himself with excitement at seeing a pirate boat.

Despite it being perfect cycling conditions, we only saw a handful of other cyclists on our ride, but there were lots of dogs and their owners enjoying the nice weather.

The FollowMe tandem does add extra weight to the bike, so it was excellent exercise for me  – a great way to try and keep that new years resolution of getting fitter in 2013. By the end of the hours ride I was feeling exhilarated and knew I’d had a great workout, and T was full of tales of pirates and ducks. 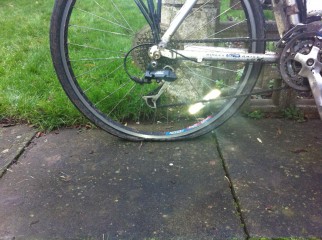 After lunch we had a chance to go and check out T’s new pre-school, which has moved from the scout hut to the local school during the Christmas holiday. N is now old enough to ride on the roads to the school at weekends (the difference in traffic volume between weekdays and weekends is incredible)  We were just about to set off, when Chris realised the tyre of the bike  I’d been riding that morning was flat.

We’ve not had a puncture for AGES! Given one or other of us (and often both) cycles every day, usually several times a day, it’s incredible we’ve gone such a long time since having one.  Luckily, one of the positive things about running a family cycling website is that you tend to have lots of bikes hanging around, so Chris was able to replace the bike/FollowMe with a bike/tagalong, and we were ready to go.  I am guilty of often complaining about the number of bikes and components we have lying around, but for once I was very grateful we didn’t have to leap in the car to get there on time.

It may only have been the usual commute up to the school, which takes ten minutes, but it was lovely to be the four of us cycling along together – our first true family cycle ride of 2013.

We’d love to hear all about your first family cycle ride of the year. If you’d like to write us a blog about it, do please get in touch through our Contact Us page.