What’s it like using a cargo bike for the first time?

Home » advice » cycling with kids » What’s it like using a cargo bike for the first time?

Have you ever wondered what it’s like to buy a cargo bike, and carry your children around in it? Would you like to give it a go, but feeling a bit nervous? Mum of two Beki was in the same position a few weeks ago, before taking the plunge and getting a cargo bike to transport her two daughters around.  In this guest blog she tells us how the first two weeks of being a cargo bike owner have gone, and gives some handy tips for those thinking about following her lead. Over to you Beki:

A bit about me and my cargo

I work two days a week and have two young children, 23 month old (“I”) and a nearly four year old (“M”).  These are my (very unqualified) thoughts on my (extremely new and wonderful) cargo bike. 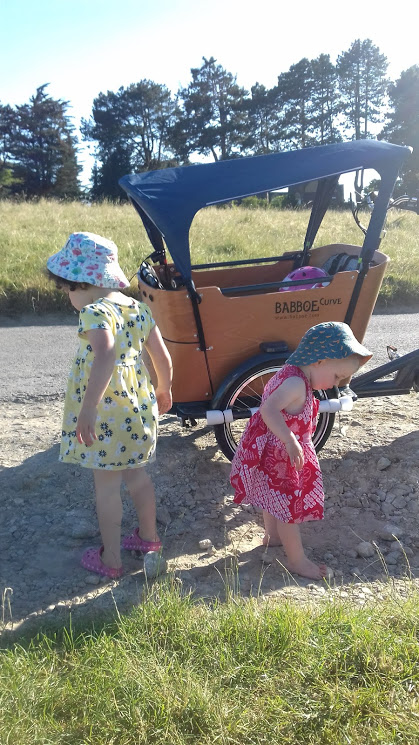 Why a cargo bike?

When we made the decision to move just outside our town for a taste of the countryside, but without the rural isolation, we had just one thought troubling us (aside from the fact that packing a house with a one and a three year old is a Sisyphean task if ever there was one). That thought was transport. It’s not nearly rural enough to justify a second car, nor would we want one. But do we really want to walk over a mile into town (and then back again) for preschool runs, library visits or shopping; almost every day, with two wee bairns?

I knew the answer to our problem straight away, because I’d been dreaming about it and going on about it for years. “Y’know“, I’d say to anyone who’d listen, “I just want one of those Dutch bikes, with your front wheel way over there somewhere and a bath-tub-thing at the front for the kids and the shopping and the dog.”

Finally I had an excuse, and a way to save getting another petrol-guzzling money-munching car. We would buy a cargo bike!

How did I choose the right cargo bike for our family?

Once we’d made the decision to buy a cargo bike, we had to actually find one! After visiting our local bike shop and being told that cargo bikes did not exist in this country, we thankfully found a company called Kids and Family Cycles, based near Bournemouth. They provide bicycles for families, for people who use wheelchairs and other specialist cycling requirements. We booked an appointment with them on a Saturday afternoon and after enjoying a picnic on the beach, we arrived at the their HQ to an array of cargo bikes laid out by a quiet residential road. For a couple of hours, we tried out several different types of cargo bike, while Carolyn – founder of Kids & Family Cycles – gave us sterling advice and comparisons. There was no rush and no sales talk. We could try out the two we liked best several times over.

After agonising between two makes – the Danish Christiana and the Dutch Babboe – we decided that the Dutch safety standards, coupled with the comfortable ‘sit up and beg’ style of riding meant the Babboe was the one for us. We had to go for the Babboe Mountain Curve, because where we live is pretty darn hilly, so we needed an electric assist and a powerful one at that. 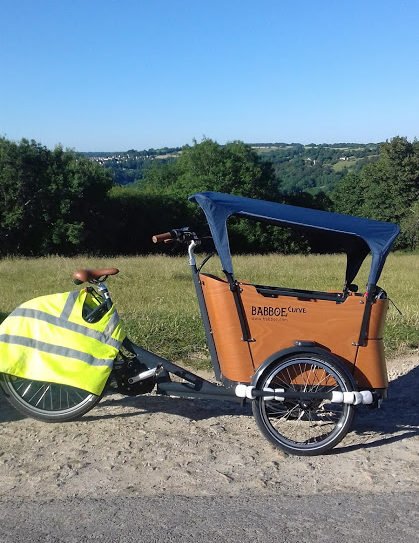 What difference has the Babboe Mountain Curve made to our daily life?

Before the Babboe arrived, and after we moved, I was carrying the younger (‘I’) in a sling whilst the elder one (‘M’) was walking to preschool and back. Although we loved the walk, spotting deer and picking flowers on the way, it was clearly a bit much for M. She is a fantastic walker but by the end of the week she’d be very tired. So our Fridays generally consisted of rereading the Katie Morag back catalogue. And lots of weeping.

Now they both sit happily in the Mountain Curve, and as of today (2 weeks and 1 day in) the novelty has not worn off and they sing and chat to me as I ride. Although at the moment I have three-point straps for their seatbelts, I’m slightly worried that ‘I’, being an adventurous soul, will try to clamber out. I’ve heard tell of some five-point straps that might be more secure. Maybe something to consider when you’re buying and something I might invest in, in the future. 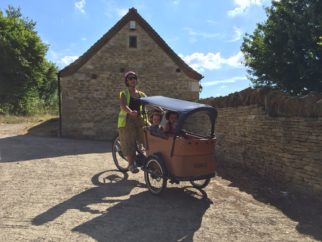 Things I wish I had known before I bought my cargo bike:

How great it is – I would have bought one when my eldest was younger and we had more years in the bike ahead of us!

Cargo bike wheels are not invincible to punctures, but they are much more annoying to fix.

How terrible the cycling infrastructure is in this country. I wouldn’t have changed my decision, but I would have started campaigning to my council sooner for better roads and more investment in cycling!

First you strap your wayward offspring into the bike, then you spend time faffing with the locks. And when you get there: lock up first, then release the tiny hounds.

Things I’m glad I do know now that I’ve bought my cargo bike:

You need to spend on the locks if you’re spending on the bike. I don’t know if we’re doing enough, but with two gold-standard locks plus a cable and the back wheel lock, I know I’m making it quite annoying to steal. My friend also gave me the tip when locking your bike to try to give the least about of leverage for a thief to fit in their bolt cutters – I try to ‘fill’ the lock with my bike frame, wheels and whatever I’m locking it to.

How to cycle in traffic. Cars generally give us a wide berth. But I’m glad I’m already a confident cyclist with years of perilous cycling in London under my belt; because my cargo contains my heiresses, so it’s pretty important.

There are other cargo bike riders out there! Not in our town, yet, but online and in very friendly groups online too.

Thanks to Beki for this guest post about her first few weeks using her Babboe Mountain Curve cargo bike. Beki is a member of the Family Cycling UK Facebook Group, where you can find lots of other parents using cargo bikes to transport their kids.

Has Beki’s tale inspired you to pluck up courage and get a cargo bike?  Do you already have one and want to share your hints and tips? Do please leave a comment below for others to read.

Other posts you may want to take a look at:

Affiliate disclosure:  Some of the links on this page use affiliate marketing, which means we may get a small commission if you make a purchase through them. This helps us to keep the website going, so a massive thanks! 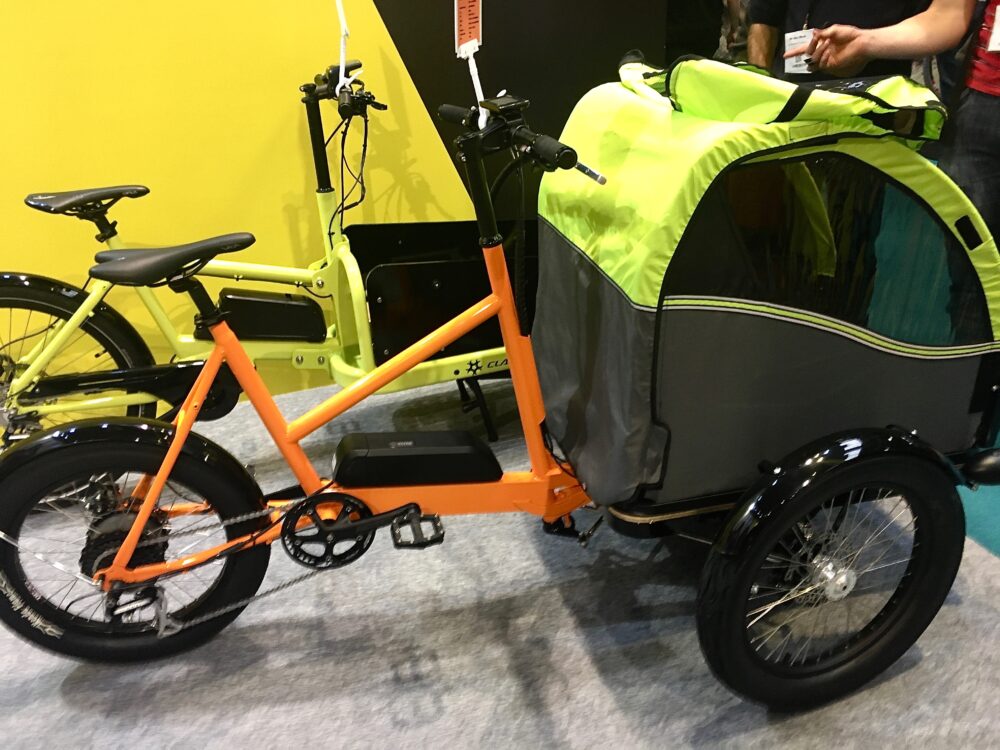 If you have a couple more hundreds to spend, I strongly suggest getting the babboe Carve instead of Curve. This version gets inclined in the curves so you don’t have to slow down and worry about the centrifuge force. Also, if the side of the road is not flat you can still drive vertically. Mine has 5100kms and I still use it daily.

Are there any updates? I’ve read the babboe curve and curve-E have back wheels problems after a few months of regular use. Does the curve mountain have any such issues?