Cycling whilst pregnant: a mum’s story and top tips

As more and more women take up cycling, either as a sport or method of transport, there are an increasing number of mums-to-be who continue cycling whilst pregnant. Here Dawn Rahman, kindly shares her experiences of cycling during her pregnancy.

Cycling in the early weeks of pregnancy

In September 2011 I completed Ironman Wales and had been racking up some decent mileage on the bike during training in the preceding months. Fast forward six weeks and I found out I was pregnant. In fact, the week before I found out, I’d been out for a 70 mile ride with a local cycle club. I was keen to continue cycling whilst pregnant but struggled to find information about what was safe or recommended.

Luckily I had a very supportive midwife who advised that as my body was used to doing exercise it made sense to continue cycling during my pregnancy as long as I was careful and didn’t overdo it. As someone who likes to plan everything to the nth degree that all sounded a bit vague to me.  So I set about trying to find out more information about cycling during pregnancy on the internet.

Hours were spent pouring over advice ranging from not letting your heart rate rise above 140bpm, changing your bike position to a more upright style to outright horror that a woman would even consider putting her unborn child at harm by carrying out an activity as dangerous as cycling. After reading lots of ‘opinions’ but no real practical advice, my head along with my hormones were in a big spin!

Eventually, I stopped reading and just decided to see how I felt cycling and take it from there. Up until around 14 weeks this wasn’t that easy as I suffered from horrible nausea from the moment I woke up until I went to sleep at night. However, cycling made it no worse so I started off a bit nervously with my commute to the train station on my trusty Specialised Dolce road bike. This was a 5 mile ride predominantly on a traffic free route. To be honest, it didn’t feel any different at all, but obviously this early on I had no visible bump and so it made very little difference to my riding style.

The second trimester was a real Breeze! 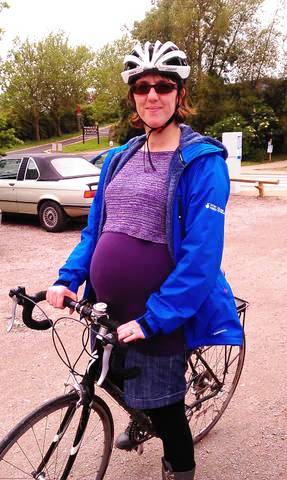 By week 12 I was fed up of just doing my commute. As part of my job is to promote women only Breeze rides, I decided to start organising local rides of 5-10 miles in my area.

As I did this two things happened. Firstly, by week 14 the nausea subsided and I suddenly felt amazing and had lots of energy. Secondly, a group of women attending my Breeze rides were keen to start riding longer distances. This encouraged me to put on some 20 mile rides. I think that because I was previously used to regularly doing anything between 50-100 mile rides that my body was still easily able to cope with 20 miles as a distance. As I felt so good on the bike I also signed up for 30 days of biking in April that year and during one week cycled over 65 miles!

As my bump became bigger I found that I became a lot more cautious as I was cycling, my mothering instincts were clearly kicking in. I rarely rode on busy roads and found that hills weren’t quite as easy as before. I was much more careful on any descents (more so than normal) and towards the last few weeks my thighs would brush against my bump but it wasn’t uncomfortable. However, I never felt my balance change and I never had to adjust the position on my road bike.

Even at 39 weeks pregnant my bump remained relatively small though so I think this obviously played a part, had I been huge I would probably have switched to a more upright riding position.

Cycling in the last weeks of pregnancy

I did my last 20 mile ride at 35 weeks pregnant and then dropped my mileage back down to 5-10 miles between 35-39 weeks. I’d had a very healthy pregnancy and the midwife was amazed at how low my blood pressure remained throughout. I definitely think this was due to the cycling and also thrice weekly trips to the swimming pool.

However, my little boy had got himself into a position that was extremely uncomfortable for me during the last 6 weeks. If anything, cycling was a relief as I could barely walk more than 5 minutes without getting extreme backache but being on the bike was a lot more comfortable.

At week 39, I cycled to the local Mothercare (to the horror of the staff there) to pick up a few things and then I stopped cycling. But not because it felt uncomfortable rather it just wouldn’t stop raining and I was fed up of riding in the rain, so I decided to put my feet up and watch the Tour de France on the telly instead.  A week later, my gorgeous boy arrived and four weeks later I was back on the bike again amazed at how much easier it was minus the bump!

My top ten of things I did cycling whilst pregnant:

5)      Swapped my ‘clipped in’ pedals for flat pedals as a generally accident prone person I didn’t need any falling off incidents.

6)      The bigger the bump got, wore looser clothing around my middle. And wore layers so that if I felt like I was overheating I could easily strip off

7)      I was riding through winter, so if it looked frosty or icy I didn’t risk cycling

9)      Resisted the urge to cycle at speed, rather started to take it easy and enjoy the scenery

10)   Took it easy going up hills, even if it did mean getting overtaken by others

Did you cycle during your pregnancy? Are you pregnant at the moment and thinking of cycling?  We’d love to share your tips with other mums-to-be.

You can read about how Dawn continued cycling once her little boy arrived here.