Are we FINALLY going Dutch? A gear change for cycling

Home » blog » Are we FINALLY going Dutch? A gear change for cycling

Are we finally going Dutch? A gear change for cycling

Is today the day that England FINALLY becomes a cycling nation?  The day when cycling FINALLY becomes a viable way to travel around, an alternative to taking the car for short, everyday journeys? The day that children everywhere can FINALLY start cycling safely to school? The day, dare I say it, we start to go Dutch?   Well, perhaps that’s being a little over-enthusiastic, but it feels like we might be on the way!   Today is the day that the government have released details of how the £2 billion earmarked for cycling in May 2020 is going to be spent (so, yes, this is the subsequent follow up to that funding – not another pot of money).   But it’s also the day we finally get a vision of a future where cycling matters, plus a new set of standards, which tell us how our cycling infrastructure should be built.

The government has just launched Gear Change – A bold vision for cycling and walking.   As someone who has always been left feeling deeply frustrated by government pronouncements on cycling, this is a unique moment. 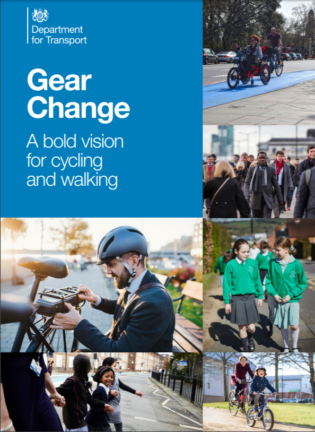 Just to quote from the forward –  here’s what Boris has to say:

“I have always known that millions more people in this country want to cycle, if the conditions are right, and the past four months have proved it.

Wow! This is unprecedented – an acknowledgement at the highest level that increasing cycling is good for drivers and shop keepers – two of the traditional sources of most anti-cycle infrastructure sentiments, from a Prime Minister who cycles himself, and just gets it – cycling makes you happier!

“All of us, cyclists and non-cyclists alike, have suddenly found out what it is like to have streets where you can breathe clean air, hear the birds singing at noon, and walk or ride in safety. We have all noticed the new found safety on our roads with fewer cars hurtling down our streets, near our homes and
our gardens and our schools.

That is why this document aims to kick off the most radical change to our cities since the arrival of mass motoring. We announced in May £2 billion of new funding for cycling and walking – representing a sixfold increase in dedicated funding, the biggest increase this country has ever seen.”

Wow!  The realisation that we can only do with a radical overhaul of the spaces that have, without our permission, been given over to the dominance of polluting and socially isolating motor transportation.  And perhaps a hint that we could take what has been a truly awful few months for so many and have something great for our environment come out of it.

I could go on, and on.  This document sound like all our dreams come true!    It’s possibly not surprising as it’s been masterminded by former journalist Andrew Gilligan, who was the Cycling Commissioner for London when Boris was mayor, and responsible for improving standards of infrastructure during that time.  He’s now moved to be Boris’s transport advisor.

We have a unique set of circumstances.  We have a Prime Minister renowned for using cycling as a means of transport, who is on a personal, post-Covid crusade to get the nation fitter whilst facing into the looming threat of climate change, with an advisor that understands the needs of cyclists and pedestrians and who has been willing to listen to the advice of experts whilst developing a robust set of guidelines.

There are a huge number of pages to get through in detail, but the four themes are making me feel positive:

The devil is bound to be in the detail, but on the surface, this appears to be so much of what everyone involved in cycle campaigning has been dreaming of for so long.

There are some headline-grabbing initiatives, including vouchers for bike repairs and free training for anyone who needs it.  But these are all useless without safe places to ride a bike.

We are promised a new organisation called Active Travel England, which will be responsible for ensuring that local authorities build cycling infrastructure that is fit for purpose (incidentally there was an organisation called Cycling England that used to try and do similar, but was disbanded almost a decade ago – oh lost time!)

We are promised no more narrow white lines down busy roads – you know the ones full of potholes and no restriction on parked cars?   Instead, we get an acknowledgement that cycling infrastructure needs to be separate from fast-moving traffic not just on roads but also at the junctions.

We’re promised space for cargo bikes and disabled cyclists with at least 2 metres IN EACH direction. And no more “cosmetic changes” that may look good, but don’t improve cyclist safety.

No more stop, start provision, where you get spat out into fast-moving traffic, instead of full provision along the entire route, which is well signed and lit. This also means a reduction in “showpieces” of infrastructure that doesn’t actually link to anything else.

Routes need to be direct and easy to ride – no more massive detours or having to get on and off your bike every few minutes.

There’s even a hint of legal changes coming, that will protect vulnerable road users – which if this happens will be a huge change to bring us in line with more cycling-friendly nations.

There’ll be no more being fobbed off with authorities who use a lack of national guidelines as an excuse to build no or substandard infrastructure.  Authorities will now have to show that they’ve considered active travel in their highways projects or face loss of funding.

Because, and this is perhaps one of the most important bits, we have also been given Cycle Infrastructure Design – Local Transport Note 1/20.   This 188 page document details the standards we can expect, and the omens are good.

On the first page it says “Inclusive cycling is the underlying theme so that people of all ages and abilities are considered. “

I’ve not had a chance to read the entire 188 pages yet, but here’s a little bit from Chapter 4 – Design Principles and Processes:

“Cycle traffic has its own characteristics that are distinct from motor traffic and pedestrian traffic. These should be recognised and incorporated from the outset of the planning and design process. There are five fundamental design principles for all cycle infrastructure that will ensure it is accessible to all.

The relative importance of each attribute, and how each is delivered, will depend on the situation in which design is being applied. For example, safety for cyclists is largely determined by achieving separation from busy and fast motor traffic, but this can be achieved in several ways, by provision of separate infrastructure, through removal of traffic from an existing street, or a reduction in traffic speed or volume…..

When designing new highways and improvement schemes, planning for cycling from the outset can ensure that sufficient land is acquired to accommodate the optimum design. “

At long last – cycling being seen as its own form of transport – with its own needs!  To be thought about from the beginning of a scheme, rather than an inconvenient add on at the end of the process, if we’re lucky!

Obviously there’s a long way to go to raise the terrible standards of most roads to one that parents up and down the country would be happy to let their children cycle to school on, and there will be a need for a lot more money to make Boris’s dream come true.

It’ll take time to enact all the measures talked about, and there will be a huge need to keep the pressure on to ensure that all the funding required is forthcoming.  Yes, £2 billion has already been earmarked over the next 5 years, but that will not deliver Boris’s dream of ubiquitous cycling.  We’ll need many times that amount, and preferably soon!

There will be a need for everyone to remain vigilant and make sure that design standards are met and councils and authorities fulfil their obligations.  For campaigners to work with their local authorities to ensure routes are made safe.  For parents to work with their schools to ensure there are plenty of bike sheds available, and to campaign for safe routes to schools to be a priority.

But that’s for another day.  Today cyclists and cycling campaigners should be celebrating – we’re one huge step nearer to that dream!

Other articles you may enjoy: