Using stations and trains in Holland on our family cycling holiday

In my previous blog, I wrote about the excitement of setting off on a family cycling holiday to Holland, complete with 4 adults and 4 children aged 7 and under.  After reaching Maassluis and enjoying the local apple cake, it was finally time for us to get to experience taking our bikes on the trains in Holland. This of course involved the first of our Dutch station encounters – which really did become quite epic on occasions!

Negotiating the stations and platforms in Holland was generally not too much trouble, which is saying something considering we had 4 adult bikes, 4 childrens bikes and two child bike trailers!

Where there are steps there was also often the lift option which was particularly useful for the trailers.  The steps do have a ‘trough’ down each side for the bikes wheels and so in theory you can push them up and down. However this was impossible for the  little ones and was a bit tricky with heavy panniers – but doable.  We came across a subway under the railway where we tackled this new concept both on the way out, and then again on the way back – by which time we had mastered the tactic a little better.

Getting on and off the trains in Holland with bikes, kids and trailers

The actual process of getting on and off the trains, which were all on limited stops, was a bit of an experience!  A few times we had to split up as the ‘bike sections’ on the train would not fit all of us and one was at the front and one at the back.  These sections are easy to spot as the train comes in as there is a very large picture of a bike on the door! 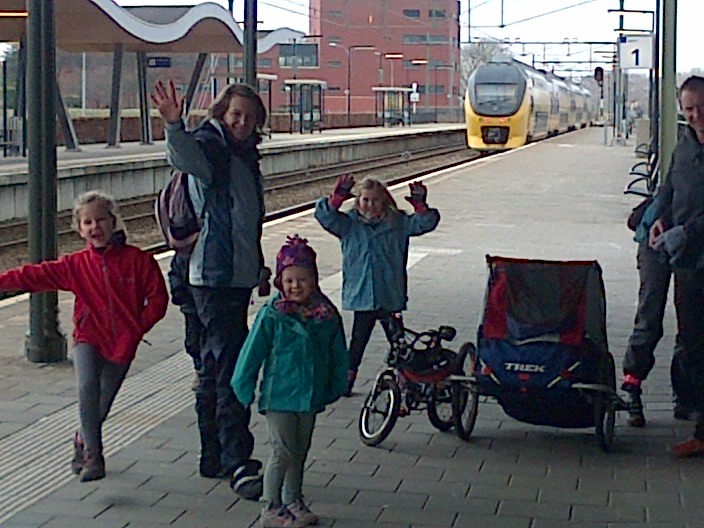 We were very lucky to have a kind Dutch couple to help us get on the first train –  all 8 of us, 8 bikes and 2 trailers made it onto the train – and  we were very relieved to find they were getting off the train at the same stop as us (Bergen Op Zoom) and kindly offered to help us off – phew!

With that first crucial train trip successfully out of the way, our further 5 Dutch train transfer experiences (over the next 4 days), varied from kind guards holding  the train whilst our child/bike transitions began, to just mad running up and down the platform ferrying more bikes and trailers hoping that in process the train hadn’t left without anyone or anything!  I’m not sure how sometimes, but we did manage to all get on, every time.

We had our own ‘person tracking system’ whereby each one of us had a number 1 through 8 and as soon as you heard the numbers being called in order you had to shout yours out (including Len Goodman style ‘sev-en’).  This ending up being great family entertainment and caused much amusement each time.  Luckily we never lost person number 1! 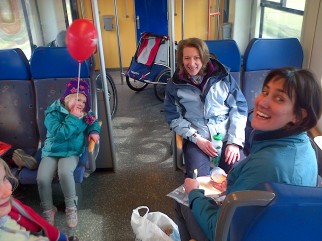 Once safely on the trains we strapped the bikes to the lashing areas and went ‘upstairs’ as many of the trains are double-deckers.  This was exciting for the children as it was a totally new experience plus the views were much better.

Buying tickets to take your bike on a train in Holland

If you’re planning your first family cycling holiday to Holland, it’s worth knowing that you can buy the tickets to take your bikes on the train from either the station counters or at machines on the platforms.  Be warned however – the machines only take coins or Maestro cards and you can only pay with cash or Maestro cards at the counters.  This nearly caught us out, and  we had to raid the final nights ‘ferry beer fund’ to pay cash for the train, so we won’t make that mistake again! 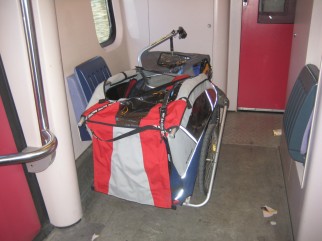 The trains that we needed to catch were all quite frequent so we never had to wait more than about 15 minutes and, what’s more, not one of them was late.  We travelled by train on Easter Sunday and the service was still excellent although the counters were all closed and there was no evidence of any ticket collectors.

Overall the train experiences were positive and we would definitely use them again as a great way to get to our destination and see more of the beautiful (flat!) Dutch countryside without the need to cycle all the way.

Find out how the rest of Lucy’s holiday went:

We are about the set off from on a 3 week cycling trip in Holland with our boys – aged 1.5 and 4. We leave Australia in 3 weeks and I’m busily making sure we have everything organised :).

I read here http://www.holland-cycling.com/planning-your-trip/getting-around/rail – that trailers are not allowed on trains. After reading your post it looks like you used a number of trailers on your trip.

Did you find any problems with this? Or are child trailers not included as part of the exclusion?

I look forward to hearing from you!