Last Monday it was major excitement in our house – N had been selected to take part in bike training, as part of a Savage Skills Experience roadshow (run by some of the world’s best stunt mountain bike and freestyle riders).  He had to cycle to school himself, rather than go on the tag along, which was a novelty in itself, and then he got to enjoy the Ben Savage and Savage Skills display during lessons – what a treat!  At the time, we had no idea he was also watching the finalists from ITV’s  “Let’s Get Gold”  – evidence that the team were working hard at their day jobs while also training for their forthcoming TV appearance.

It’s taken a week or so to get this blog up, as N wanted to write it himself, so here goes – written and dictated by N, aged 6, and typed by Mummy!

“Last Monday I was at school when Savage Skills came. We had to go outside and they gave us a show. They did jumps, put scaffolding up and did tricks on the scaffolding. Ben Savage is Number 3 in the World at something (see quiz). He was on a purple BMX type bike. Sadly we didn’t get to see him do a 360 because he didn’t have the right ramps. I thought it was very good – everyone cheered.

Most people went back inside, but I stayed outside and did some tricks on my bike with some other bikers from my year. I got to go through cones and ride over bumpy stuff. There were some cones with long thin things on them and there was a little gap that we rode through – it was really difficult. At the end of that there was a huge corner we had to lean over to go round, because if a corner is too steep to just turn your handle bars, you have to lean over to the side.”

So, that’s as much as you’ll get out of a 6 year old.  Miss Welsh, the teacher who kindly organises all the cycling activities at the school, added

“We have had Savage Skills Display Team at school on several occasions and there is always a buzz about the corridors as the children are always very excited. Ben and the team are fantastic with the children and as well as showing the children many skills, they are extremely safety conscious. Ben regularly tells the children how important it is to wear a helmet and encourages them to start with the basic skills and not attempt anything dangerous.

A great day was had by all and we can’t wait to invite Ben and the team back next year.” Going over the bumpy stuff!

As N couldn’t remember what Ben was number three in the world at, he’s (very cunningly), decided to turn it into a quiz. I am actually quite proud at his problem solving skills!

Find out what Ben Savage is Number 3 in the world at.

A couple of months ago we saw Ben and one of his team, James, perform at a family fun day – it really was awe inspiring watching the skill they have over their bikes. The high jumping was unbelievable!  Our 3 year old still talks regularly about Ben and James, so they really do act as an inspiration all ages.  It’s great to have a wide range of cycling role models for the kids, and Ben Savage and his team are up there with the best of them.

Here are a couple of pictures we took at the Fun Day.  More details of where you can see them can be found at the Savage Skills website,  www.savageskills.co.uk 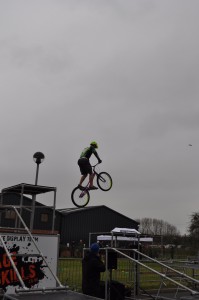 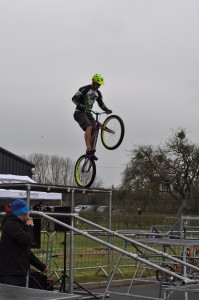 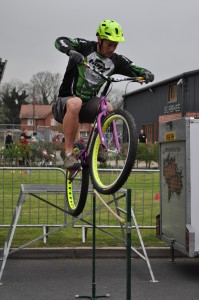 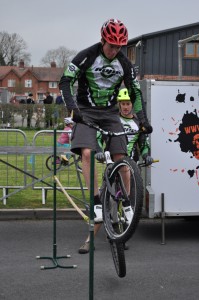